Railways' two biggest unions, AIRF and NFIR too have extended their support to the bandh and are planning to hold rallies and demonstrations 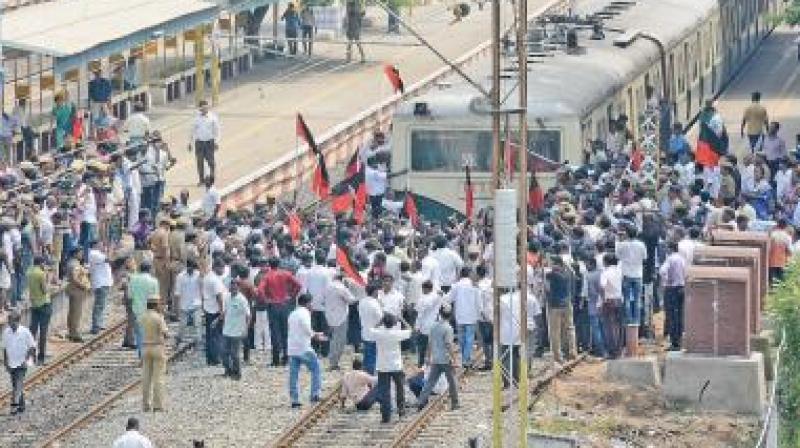 As part of the bandh, farmers' unions may organise dharnas, demonstrations, rallies and road and rail blockades in 16 states. Some opposition political parties, left parties and their frontal organisations, central trade unions and transporters have extended their support to the bandh, Kumar said.

Several opposition parties and non-farming groups including all the major trade unions have supported the strike called by the farmers.

In fact the Railways' two biggest unions, AIRF and NFIR too have extended their support to the bandh and are planning to hold rallies and demonstrations.

Kumar said the mood and temper of farmer unions' leaders and their supporters remained high in view of expressions of solidarity and support from various sections of the society.

"The impact of the bandh on normal life is likely to be minimal except in Punjab, Haryana, Delhi-NCR region and Western UP. As of now, no major law and order problem is anticipated during the proposed bandh," he said.

"However, cautious approach is required as pro-LWE, Tamil chauvinist organisations members may participate in these protests. Security personnel are advised to keep vigil to contain the impact of the bandh. Therefore, security set up needs to be beefed up, he added.

The director general also advised officials to ensure random checks, intensive screening, and combing by the RPF in coordination with the GRP/state police on platforms, running trains, passenger areas and station premises.

He also suggested the use of sniffer dogs to conduct anti-sabotage checks and regular announcements through the public address system for crowd control and maintenance of law and order.

"An eye should be kept on any sensational posters found pasted in train/station area, they should immediately be removed. Any distribution of pamphlets containing inflammatory propaganda should also be checked," he said.

"All major access control points of stations should be manned...One striking reserve force should be kept ready at major stations...Trade union meetings should be kept watch over and necessary precautionary steps may be taken for smooth and peaceful conduct of these meetings. Activities of unrecognised unions etc. may also be closely monitored, he added.

The director general also warned that crew lobbies, operation control rooms, coaching depots and other such locations may be spots where the agitators may try to disrupt work as these locations are vital for train running.

Proper security arrangement may be planned for these places. The manpower within the zone may be mobilised to cover most vulnerable locations," he said.

"If the whole of zone is likely to get affected the same way, the posts need to resort to dynamic deployment and may use force under their command intelligently and as the turn of events demands, he added.