India   All India  08 Dec 2021  CDS Gen Bipin Rawat, wife and 11 others killed in helicopter crash near Coonoor
India, All India

IAF Group Captain Varun Singh, who is the lone survivor of the crash, is now under treatment at the Military Hospital, Wellington 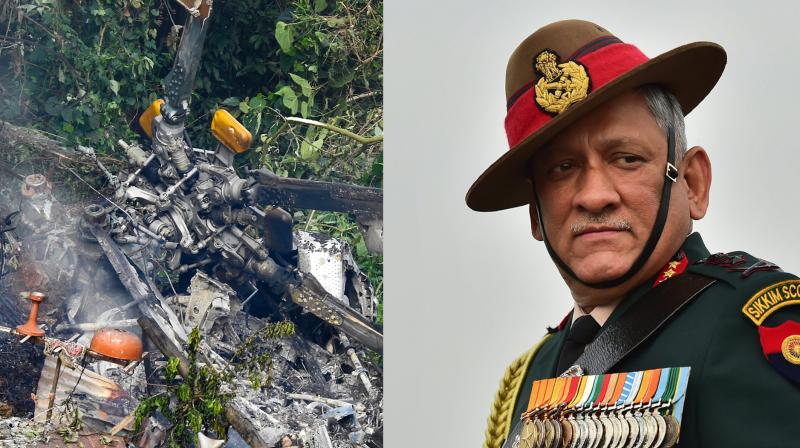 Wreckage of the crashed IAF Mi-17V5 helicopter, in Coonoor, Tamil Nadu, Wednesday, Dec. 8, 2021. CDS Gen Bipin Rawat accompanied by his wife Madhulika Rawat, his staff and other officials were on board. (PTI Photo)

Gen Rawat, who was India’s first CDS, was going to the Defence Services Staff College, Wellington, to address the faculty and student officers of its staff course. Sources said he had reached Sulur airbase on Wednesday morning in a special IAF plane. He took a Mi-17V5 helicopter from Sulur to Wellington, which crashed at around 12.15 pm. There were 14 persons on board, including members of Gen. Rawat’s personal staff and four members of the crew.

“With deep regret, it has now been ascertained that Gen. Bipin Rawat, Mrs Madhulika Rawat and 11 other persons on board have died in the unfortunate accident,” the IAF said in a tweet. The IAF has ordered an inquiry to ascertain the reason behind the crash.

IAF Group Captain Varun Singh, who is the lone survivor of the crash, is now under treatment at the Military Hospital, Wellington. Incidentally Group Captain Singh was awarded the Shaurya Chakra on this year’s Independence Day for saving his LCA Tejas fighter aircraft during an aerial emergency in 2020.

Reports said the Mi-17V5 helicopter was flying at low altitude in foggy conditions when it crashed into a valley, before falling through the trees. A fire engulfed the helicopter by the time it landed on the ground. Two persons, who were ablaze, fell down from the helicopter, eyewitnesses said. The mangled and burnt remains of the IAF helicopter were strewn along the site, even as rescue services personnel were seen carrying bodies in stretchers to be transported through waiting ambulances.  A major tragedy was averted as the helicopter fell at some distance away from human habitation, averting possible mass casualties.

Eyewitnesses at the crash site had also said that three persons, including Gen. Rawat, had been rescued alive with severe burn injuries and shifted to the Military Hospital in Wellington, where Gen. Rawat succumbed to his injuries soon afterwards.

The Cabinet Committee on Security met on Wednesday evening to take stock in the wake of Gen. Rawat’s tragic death. The government is likely to announce the new CDS soon as India is currently engaged in a tense military standoff with China. For now, Army Chief Gen. M.M. Naravane is the frontrunner for the CDS post if the Narendra Modi government follows the seniority criteria.

Prime Minister Narendra Modi said he was deeply anguished by the helicopter crash in which the nation lost Gen. Rawat, his wife and several other armed forces personnel. “As India’s first CDS, Gen. Rawat worked on diverse aspects relating to our armed forces including defence reforms. He brought with him a rich experience of serving in the Army. India will never forget his exceptional service," said Mr Modi.

Gen. Rawat had survived a Cheetah helicopter crash in Dimapur, Nagaland, on February 3, 2015. He was then a lieutenant-general.

The victims’ mortal remains will be flown to New Delhi from Coimbatore Thursday, after a wreath-laying ceremony in the morning at Wellington, police and defence sources said. In New Delhi, officials said the mortal remains of Gen. Rawat and his wife are likely to arrive Thursday evening and their cremation will take place at Delhi Cantonment on Friday.

Earlier on Wednesday, defence minister Rajnath Singh briefed the Prime Minister on the accident. Mr Singh will make a statement in both Houses of Parliament on Thursday on the helicopter crash. Mr Singh had asked IAF chief Air Chief Marshal V.R. Chaudhari to visit the site of the crash. The defence minister had also visited the CDS’ residence and spoken to his daughter. He also had a meeting with the Army Chief.

Brig L.S. Lidder, defence adviser to the CDS, and his staff officer, Lt. Col. Harinder, were among those who were killed. Wing Commander Prithvi Singh, the pilot and the commanding officer of 109 Helicopter Unit, was also killed in the crash.

The horrific crash near Coonoor is the worst accident after the helicopter crash in Poonch in 1963 in which six officers -- Lt. Gen. Daulat Singh, Air Vice Marshal E.W. Pinto, Lt. Gen. Bikram Singh, Maj. Gen. K.N.D. Nanavati, Brig. S.R. Oberoi and Flt Lt S.S. Sodhi -- were killed. In order to prevent the loss of senior military commanders, there is a protocol that top armed forces officers can’t fly together in a helicopter.

Earlier, Nilgiris collector S.P. Amrith told PTI that 13 persons were killed in the crash, while there was one survivor. While the helicopter took off at around 10.30 am on Wednesday, the Coonoor Fire Station received a call at 12 noon following the accident, official sources said.

Gen. Rawat had taken charge as India’s first CDS in January 2020. He was working towards new theatre commands and indigenisation. Gen. Rawat was an alumnus of St. Edward School, Shimla, and commissioned into the Army’s 11 Gorkha Rifles in December 1978 at IMA, Dehradun. He had become Chief of the Army Staff on December 31, 2016.