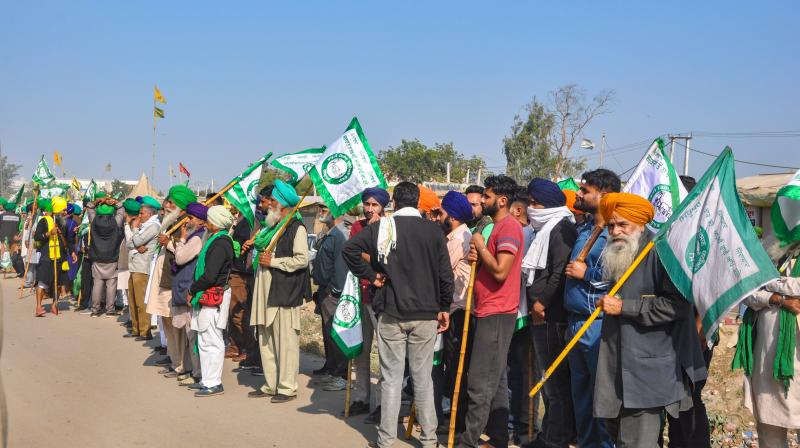 Farmers during their protest on GT Karnal road near the Singhu border, in New Delhi, Tuesday, Dec. 7, 2021. (PTI Photo)

New Delhi: With the Central government on Tuesday agreeing to most of the demands of the agitating farmers, the Samyukt Kisan Morcha (SKM) — which is spearheading the ongoing protest — is likely to call off the year-long agitation.

The Union home ministry on Tuesday sent a written draft regarding issues raised by protesting farmers to a five-member committee which has been empowered by the SKM to hold talks with the government on behalf of all the protesting farmers. The Center is believed to have said that it will form a committee to look into the demand for a legal guarantee on MSP and that “the Haryana and UP governments have agreed to withdraw all the cases lodged against the farmers during the ongoing stir”.

In a meeting held at Delhi’s Singhu border Tuesday, SKM leaders expressed satisfaction over the initiative of the Central government to resolve the standoff, but some wanted more clarity on the issues raised by them.

Farmer leader Kulwant Singh Sandhu claimed that a consensus has been arrived at and "nearly all demands" have been met. The SKM, however, said there was no consensus yet on ending the protest, which was triggered last year after the government enacted three farm laws.

"SKM confirms to have received a written draft proposal from the Government of India. The proposal was constructively discussed by the farm leaders at the SKM meeting at the Singhu Border today. The morcha will seek further clarifications on a few points of the government's proposal, and will reconvene at 2 pm tomorrow for further discussion. The SKM hopes for a positive response from the government," the umbrella body of over 40 farm unions said in a statement following the meeting.

SKM leader Balbir Singh Rajewal said the government has proposed a committee to look into the demand for a legal guarantee on MSP and that the panel will include farmer organisations outside the SKM, government officials and representatives of states. "We had objections to it. We do not want other committees who have been against our demands since the start of our agitation. We have asked the government to give a clarification in this regard,” he said.

On the draft "Electricity Amendments Bill, 2020/2021" proposed by Centre, the SKM has demanded that it should be withdrawn and not placed before Parliament.

It is learnt that the five-member committee will discuss the issues raised by the SKM leaders with the Central government before taking it up with other farmer leaders for future course of action on Wednesday.

Amid reports that the farmers’ protest is on the verge of being called off, Bharatiya Kisan Union leader Rakesh Tikait clarified that the agitation will not end until the Central government fulfills all farmers’ demands.

Mr Tikait, who has become the face of the over a year-long agitation, said, “Government proposed that they will agree to our demands and that we should end the protest… but the proposal is not clear… We have our own apprehensions, which we will discuss tomorrow… No one is going home until everything is resolved.”

The umbrella body of the farmers’ unions has also demanded removal of Section 15 of the Commission for Air Quality Management in the National Capital Region and Adjoining Areas Act 2021 which allows penal action against farmers in case of stubble burning.

The SKM also wants the Centre to announce a compensation package for the deceased farmers on lines of the one announced by the Punjab government, which has given Rs 5 lakh compensation to each family. In addition, the state government has also given a job to a family member of each deceased farmer.

Soon after the announcement of repealing of the three contentious agriculture laws, the SKM had written to the Prime Minister on November 21 about their six other demands, which included dismissal and arrest of Union minister of state for home Ajay Mishra Teni in connection with the Lakhimpur Kheri incident.