In Bhubaneswar, the opposition BJP burnt effigy of CM Naveen Patnaik for forcing farmers for distress sale of paddy. 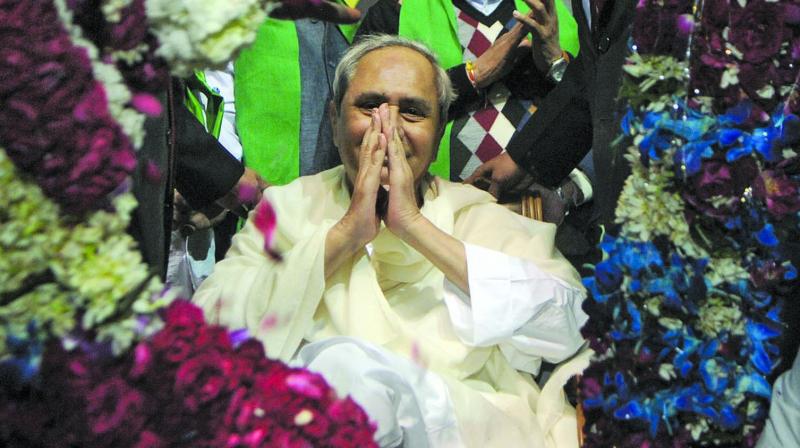 New Delhi: Odisha chief minister and BJD president Naveen Patnaik on Tuesday sought to claim all credit for development of farm sector and farmers in the state and took a swipe at the BJP saying it had no concerns for the peasant communities.

Mr Patnaik, while addressing the Krushak Adhikar Samabesh at the Talkatora stadium in New Delhi, patted his own government and party for delivering what it had promised to the people.

“We had promised to irrigate 10 lakh hectares of farmland in the last five years and we are almost completely done. In the last 4.5 years, we have spent Rs 30,000 crore on agriculture. As you can see, we make promises and we keep those promises,” the Odisha chief minister said.

Reiterating BJD’s commitment towards the farmers, he said the party has been fighting for the rights of farmers and it will continue to do so in future.

Launching scathing attack on the BJP, Mr Patnaik accused the saffron party of “forgetting” the promises it had made to the farmers in its election manifesto during the last general polls.

Mr Patnaik also blamed the BJP-led Central government for not paying attention towards materialising the unanimous resolution passed by the Odisha Assembly in connection with the demand for hike in the minimum support price (MSP) of paddy.

“I had requested the Centre several times for hiking the paddy MSP. The Odisha Assembly had passed a unanimous resolution in this regard. The House Committee of the Assembly had also tried to meet the Central government, but it yielded no results, for which you (BJD MPs, MLAs, leaders and workers) had to come to Delhi in this winter,” the CM said.

“Fixing the MSP of food grains and implementing the recommendations of the Swaminathan Committee is the responsibility of Central Government and it can’t run away from its responsibilities,” the BJD supremo said.

Mentioning about the benefits of the recently launched KALIA yojana of the Odisha Government, Patnaik said the scheme is the best one for farmers.

Notably, the BJD’s demands include hike in paddy MSP to Rs 2,930 per quintal and implementation of the recommendations of Swaminathan Commission.

In Bhubaneswar, the opposition BJP burnt effigy of CM Naveen Patnaik for forcing farmers for distress sale of paddy. Several BJP activists were detained as they tried to enter the state secretariat demanding immediate opening of mandi for procurement of paddy at government declared MSP.