The road has also become a deathtrap as a fairly large number of travelers do get killed routinely in mishaps. 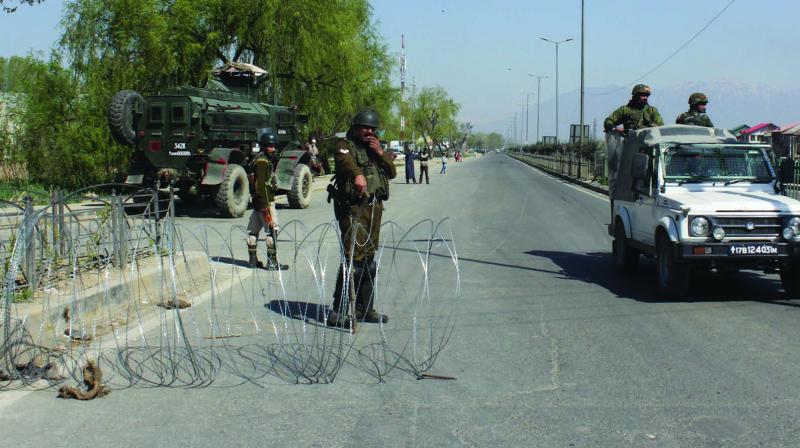 The road remains shut for days and even weeks due to landslides, soil-erosion, frost and other weather related occurrences, not only in winter but also in other seasons. (Photo: H.U. Naqash)

Ramban(J&K): Srinagar-Jammu highway is the only road-link between the Kashmir Valley and the country’s plains which remains officially “open” for vehicular traffic throughout the year. Yet the travel along the 270-km so-called all-weather road which also connects Jammu and Kashmir’s twin capitals of Srinagar and Jammu has increasingly become a nightmarish experience for people.

The road remains shut for days and even weeks due to landslides, soil-erosion, frost and other weather related occurrences, not only in winter but also in other seasons. Even if the road is officially open, it’s dilapidated condition, bottlenecks, shooting of stones at places and heavy traffic movement cause frequent and often severe gridlocks. Both passenger and goods vehicles remain stranded along the highway for days. The road has also become a deathtrap as a fairly large number of travelers do get killed routinely in mishaps.

The frequent closure of the road has also resulted into huge economic losses in the Valley where scarcity of essential commodities including food-grains and gasoline is a usual phenomenon particularly in winter. The situation is often seized by unscrupulous traders who sell goods at exorbitant prices to the Valley residents. Also, airfares touch skies particularly on Srinagar-Jammu and Srinagar-Delhi routes which see a heavy rush of passengers amid frequent and prolonged closures of the highway.

However, Kashmiri traders allege that the trucks carrying food items, fuel and sheep for the Valley are stopped at various places en-route also on various pretext other than usual natural or manmade disruptions along the highway “to deliberately add to the economic woes of the Valleyites”.

“The road is proving a death-knell for the Valley’s traders who suffered a loss of `5 crore during past couple of weeks,” said Aijaz Shahdar, vice-president of Kashmir Economic Alliance, an amalgam of various trade organizations.

“Trucks carrying vegetables, poultry birds, sheep, various eatables and fuel for the Valley are routinely stopped at Udhampur (a town at a distance of 62 kilometres up Jammu) and then not allowed to move towards the Valley for days on various pretext even if the road is through. Same is done with the downward fruit-laden trucks. We see it but a deliberate attempt to cause scarcity of essential commodities in the Valley and delay export of its apples and other fruits and, thereby, further weaken its economy,” he alleged.

The other road connecting Srinagar with Jammu via frontier districts of Poonch and Rajouri called Mughal Road (as it was the route used by Mughal emperors for their travel to and from scenic Kashmir Valley) has already been declared closed for the winter months officially. In April last year the restricted trade between Srinagar and Muzaffarabad was stopped by India unilaterally, claiming that the facility started in October 2008 as a ‘confidence-building-measure’ with Islamabad was being misused by Pakistan-based elements. The misuse, the Union Home Ministry had alleged, involved illegal inflows of weapons, narcotics and fake currency.”

The authorities said that the disruptions along the Srinagar-Jammu highway are mainly because the National Highway Authority of India (NHAI) is working on a Rs. 10,176 core project of four laning of its different sections spanning 189 km of the vital road and, therefore, a temporary phenomenon. These projects include four laning of 40.07 km Jammu-Udhampur section of NH-44, four laning of 32.10 km of Ramban-Banihal road on NH-44, four laning of 67.76 km Srinagar-Banihal section on NH-44 and construction of 58.26 km ring road.

They said that while the progress of Qazigund- Banihal tunnel project is scheduled to be completed by July this year, the other projects and also half a dozen small tunnels along the Banihal-Ramban stretch may take some more time. “Once these projects are done the hardships being faced by people currently will be over rather the travel along the NH-44 would become an all-time enjoyable experience for them,” said an official of the NHAI.