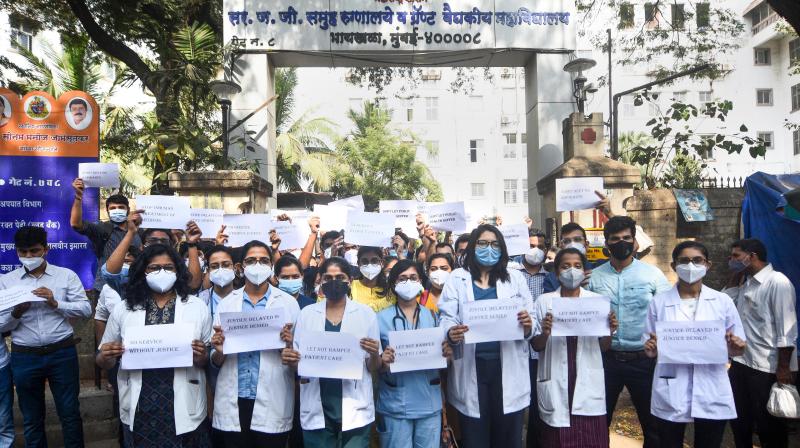 Doctors protest outside JJ hospital over the delay in NEET-PG 2021 counselling and other issues, in Mumbai. (Photo: PTI)

New Delhi: Amid widespread protests by junior doctors for NEET-PG counselling, Union Health Minister Mansukh Mandaviya on Sunday announced that the medical counselling committee (MCC) will start the counselling of the students from January 12.

The announcement will bring relief to several doctors waiting for admissions to post graduate courses.

"MCC will start the counselling of NEET-PG from January 12, 2022, following the order of the Hon'ble Supreme Court, as assured by the Ministry of Health to the resident doctors," he tweeted.

Wishing luck to everyone, he wrote, "This will give more strength to the country in the fight against Corona. My best wishes to all the candidates".

The move comes after months of protest by resident doctors across the nation against the delay in NEET-PG counseling.

The Supreme Court on Friday paved the way for starting the stalled NEET-PG 2021 counselling process based on the existing 27 per cent OBC and 10 per cent EWS reservations in the All India Quota seats.

A bench of justices DY Chandrachud and AS Bopanna, which had for two consecutive days heard the matter on the applicability of Rs 8 lakh annual income criteria for determination of economically weaker section (EWS), had passed an interim order, saying "there is an urgent need to commence the process of counselling".

The order comes as a relief for the Federation of Resident Doctors' Association (FORDA), which has recently protested over the delay in starting NEET-PG counselling. It has also moved the top court saying there is an urgent need to start the admission process.

It had said that every year approximately 45,000 candidates are selected as postgraduate (PG) doctors through the NEET-PG and delay in counselling has led to a situation where no junior doctors have been inducted 2021.

Second and third-year PG doctors are handling patients and are facing increased workload due to the Covid pandemic, FORDA had said. It had called off its strike on December 31 after the government assured that their demands would be looked into.