Governor Tathagata Roy also administered the oath of office to BJP leader Jishnu Deb Burman as the deputy CM along with 7 other ministers. 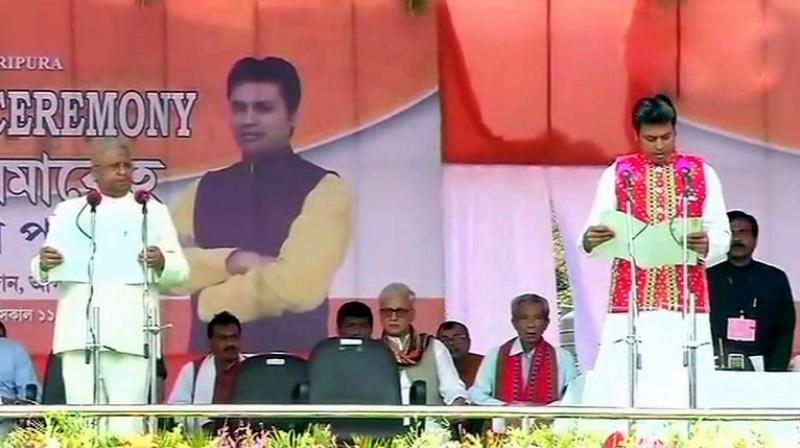 Governor Tathagata Roy also administered the oath of office to BJP leader Jishnu Deb Burman as the deputy chief minister along with seven other ministers, including IPFT chief NC Debbarma.

The Bharatiya Janata Party and its ally the Indigenous People’s Front of Tripura (IPFT) dethroned the Left Front in Tripura ending former chief minister Manik Sarkar’s over two-decade rule in the state.

The swearing-in ceremony was held at the sprawling Assam Rifles ground.

From the airport to the venue, BJP flags lined up both sides of the street, as party workers wearing saffron celebrated in the streets. Security was heightened in the capital city as the prime minister and many other dignitaries attended the ceremony. From airport to guest houses, personnel of Tripura Police, Tripura State Rifles, Central Reserved Police Force kept a tight vigil. Special commandos from Delhi were also on the job.

"A 100-ft-long stage was erected for the big function. This is a big day for us as it marks a political transition for the state. The victory has been made possible by the development work of Modiji that has inspired our workers in Tripura to work for a change," BJP general secretary Ram Madhav told news agency PTI.