INX Media case: CBI gets custody of Karti for 3 more days till March 12

CBI has already taken nine days police custody of Karti out of the 15 days prescribed under law. 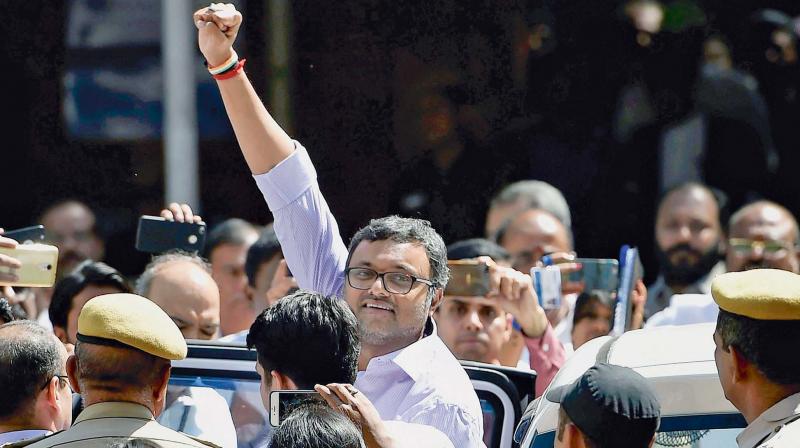 The CBI sought Karti's custody for six more days to interrogate him, saying 'new incriminating materials' have been found against him. (Photo: PTI | File)

New Delhi: A Delhi court on Friday ordered extension of Karti Chidambaram's CBI custody by three more days till March 12 after the central investigation agency underlined that it has found "new incriminating materials" against him in the INX Media money laundering case.

The CBI on Friday produced Karti Chidamabaram, son of senior Congress leader P Chidambaram, before a Delhi court and sought his custody for six more days to interrogate him, saying "new incriminating materials" have been found against him.

Karti, who has been in CBI custody since February 28, was produced before special judge Sunil Rana on the expiry of his three-day custody.

CBI has already taken nine days police custody of Karti out of the 15 days prescribed under law.

While seeking extension of his custodial interrogation for six more days, Additional Solicitor General Tushar Mehta, said that a CD has been recovered in connection with the case which needed to be sent to Central Forensic Science Laboratory (CFSL) for examination. The ASG said that new incriminating materials have been found and he has to be confronted with them.

However, senior advocate Abhishek Manu Singhvi, who is the party colleague of P Chidambaram, opposed any further custodial interrogation of Karti.

"It's tragic for me (Karti). They have no new reason for my remand. They are inventing one. CBI has to justify remand every day and every minute," Singhvi said on behalf of Karti.

It is a ten-year-old case and all the documents are available with them and "they need my custody to harass me", Karti said through his counsel.

Before commencing the proceedings on Karti, the court extended the judicial custody of his CA, S Bhaskararaman, who was arrested by the Enforcement Directorate in the case, till March 22.

In his bail plea, Karti, who was arrested by the CBI at Chennai Airport on February 28, claimed that he had never attempted to influence witnesses, tamper with documentary evidence, pollute or obstruct the judicial process as was alleged by the probe agency.

Earlier, he sought bail from the court alleging that the CBI was acting at the behest of the Centre to malign the reputation of his father during whose tenure Foreign Investment Promotion Board (FIPB) clearance was granted to the INX Media group.

Karti contended that his arrest was "illegal and arbitrary" but the agency opposed his bail plea on the grounds that the investigation was at a crucial stage and his custodial interrogation was necessary to unearth the entire conspiracy in the INX Media corruption case.

The CBI had lodged an FIR on May 15 last year alleging irregularities in the FIPB clearance to INX Media for receiving overseas funds to the tune of Rs 305 crore in 2007 when P Chidambaram was the Union finance minister.

Delhi High Court earlier on Friday granted interim relief to Karti from being arrested by the Enforcement Directorate (ED) till the next date of hearing which is March 20.

Making it clear that the trial court shall pass orders without getting influenced by the high court's directions on Friday, the bench said certain conditions be imposed on Karti like asking him to appear before the ED, as and when called by the investigating officer, and cooperate in the probe.

He shall also be directed not to leave the country and surrender his passport, it said.