In a heated argument, the accused allegedly pulled out a knife and stabbed the girl on her chest and stomach. 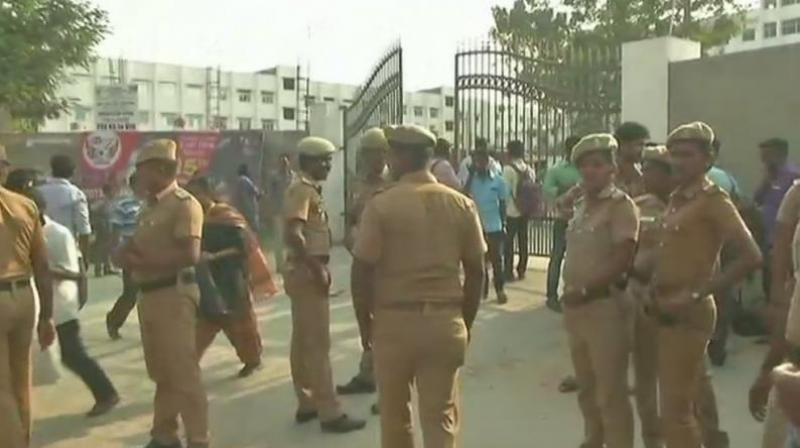 Visual from outside Meenakshi College Of Engineering in KK Nagar, Chennai where a student was stabbed to death. (Photo: ANI/Twitter)

Chennai: A college girl was stabbed to death by a man on Friday in Chennai, who claimed to be her husband -- a claim that has been denied by her relatives.

The victim identified as Ashwini Mohan, a 20-year-old second year B Com student, was stabbed outside the main entrance of Meenakshi College Of Engineering in KK Nagar, according to reports.

Although, Ashwini was rushed to a private hospital by her colleagues, she was declared brought dead by the doctors.

The locals caught hold of the accused, Alagesan, and thrashed him before handing him over to the police.

Alagesan picked up a quarrel with the girl while she was walking on the road near the college. In a heated argument, he allegedly pulled out a knife and stabbed her on her chest and stomach, a report in Times of India said.

The accused, who works in a water-can supply agency has claimed that he had married Ashwini on February 16, this year. However, the girl's relatives denied his claims stating that he had barged into the house and forcefully tied the 'mangalsutra' on her.

He also told the police that after the marriage, there was a rift between them and a complaint was lodged at the Maduravoyal police station.

The police said that Alagesan had gone to meet Ashwini to patch up with her, which ultimately turned into a tragedy.