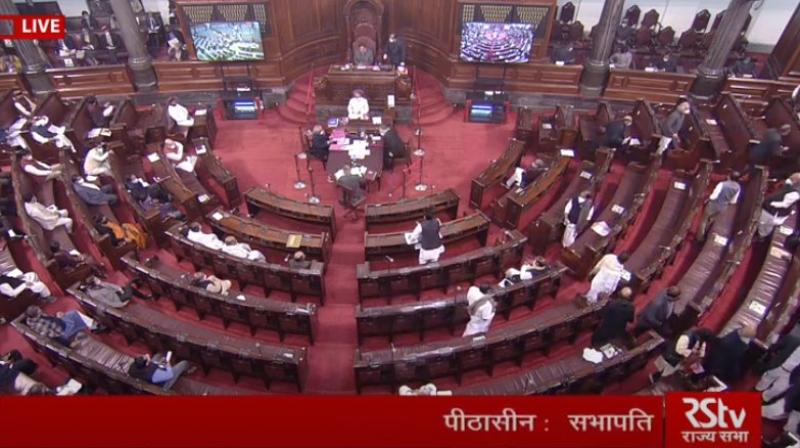 The Opposition parties claimed they will not back down and continue to keep raising the issue of rising prices in both Houses of Parliament. (ANI file photo)

New Delhi: The second part of the Budget Session of Parliament started on a stormy note on Monday with fiery scenes being seen in the Rajya Sabha. The Opposition parties, led by the Congress, demanded a discussion on the rising fuel prices. Addressing the Rajya Sabha, Leader of the Opposition Mallikarjun Kharge, said: “Petrol and diesel prices are nearly Rs 100 per litre and Rs 80 per litre respectively. LPG prices have also gone up -- and Rs 21 lakh crores have been collected by putting excise duty/cess, and because of that the entire country, including the farmers, are suffering.” The Upper House had to be adjourned twice before being adjourned for the day as the Opposition persisted with its demand for a discussion on the rising fuel prices.

Earlier on Monday, the Trinamul Congress sought the adjournment of the session in view of the Assembly elections in five states/UTs that are only a few weeks away, and the MPs may not be able to attend. Trinamul MPs Sudip Bandyopadhyay and Derek O’Brien have written to the Lok Sabha and Rajya Sabha authorities to adjourn the session due to the elections.

The Congress MPs also raised the issue of the three farm laws and the farmers sitting in protest at Delhi’s borders against these laws. They said it has been more than three months that the farmers have been sitting in protest at the borders of the national capital, braving extreme weather conditions. Both the farmers and the Congress Party are demanding that the three farm laws be withdrawn immediately. The government has told the Opposition that it is ready for a discussion on all issues, but in an organised fashion.

The Opposition parties claimed they will not back down and continue to keep raising the issue of rising prices in both Houses of Parliament. During the Budget Session’s recess, protests had been organised by most of the Opposition parties demanding an immediate rollback of the hike in fuel prices.