NIA had found Amir Zubair Siddique, while working in Sri Lanka, engaged people to indulge in espionage and terror activities in India. 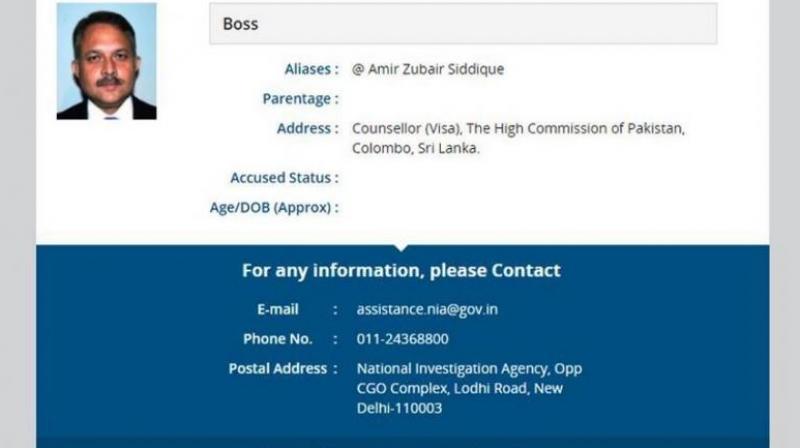 A document from the National Investigation Agency which accuses Pakistani diplomat Amir Zubair Siddique of conspiracy and terrorism. (Screengrab from NIA website)

Mumbai: In a first, the National Investigation Agency (NIA) has put Pakistani diplomat to its already long “wanted” list and released his photo, seeking information on him.

The list includes people “wanted” for various acts of alleged terrorism in India.

Diplomat Amir Zubair Siddique has been added to the wanted list that already features Major Samir Ali and Sajid Mir of the Inter-Services Intelligence (ISI) and terror fountainhead Hafiz Mohammad Saeed. The agency has put his photo on its wanted list and sought information on him.

It said the diplomat — Amir Zubair Siddique, who was posted as visa counsellor in the Pakistani High Commission in Colombo (Sri Lanka) -- had been included in the list along with two other Pakistani officers for conspiring to launch 26/11-type attacks on US and Israeli consulates besides Army and Navy commands in south India in 2014.

NIA said a fourth Pakistani officer posted in the high commission in Sri Lanka was also involved in the conspiracy.

National Investigation Agency (NIA) has put a Pakistani diplomat on its wanted list and released his photo, seeking information. pic.twitter.com/mqNXhB0ojU

During the investigation, the NIA had found that the diplomat, Amir Zubair Siddique, while working in Sri Lanka from 2009 to 2016, engaged people to indulge in espionage and terror activities in India.

NIA list has nicknamed him as ‘Boss’ and he was chargesheeted in February, along with two others, for plotting 26/11 type attacks in southern India.

He was a visa counsellor at the High Commission of Pakistan in Colombo, Sri Lanka.

The NIA has also initiated the process for securing an Interpol Red Corner notice against him.

After Siddique was nailed, Sri Lankan authorities expelled him from the country.

The Pakistan diplomat was named by a Sri Lankan resident Sakir Hussain, who is at present undergoing a simple imprisonment after pleading guilty in a court of law. He was arrested by the Tamil Nadu Police after the Intelligence Bureau busted the conspiracy in April 2014.

Hussain had carried out reconnaissance of the US consulate in Chennai and Israeli consulate in Bangalore to facilitate a terror strike similar to 26/11. Two terrorists were to be flown in from Maldives for the same.

Siddique was working as visa counsellor at the Pakistan High Commission in Colombo but had to be repatriated to Islamabad after India mounted pressure on Sri Lanka about his alleged activities targeting this country.

The documents handed over by the US to India established communication between Hussain and ‘Shahjee’, a Pakistani national introduced to the accused allegedly by a Pakistani diplomat working with its mission in Sri Lanka.