Irani will be visiting Amethi on April 13, Congress president Rahul Gandhi will visit his constituency three days later on April 16. 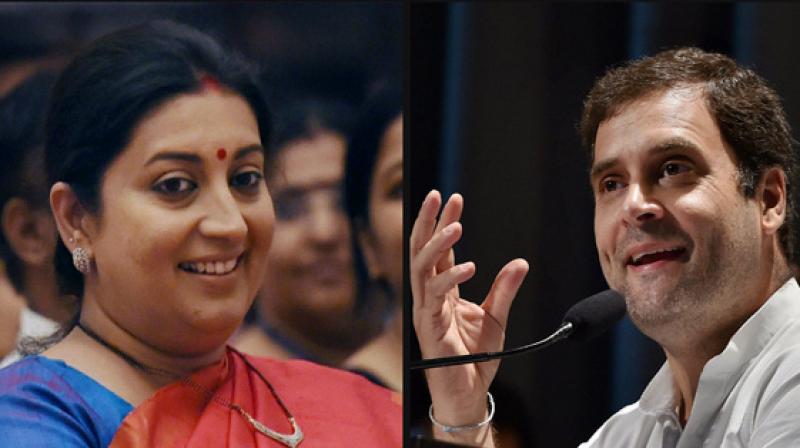 Lucknow: After promising 10,000 cows to Amethi, Union minister Smriti Irani is now offering free pilgrimage trips to the senior citizens of the constituency.

“The minister has arranged for about 200 people — 40 from each Assembly segment — to visit Hardwar and Rishikesh. This is her gift to the senior citizens of Amethi”, said a local BJP leader. A doctor is accompanying the pilgrims.

Ms Irani is scheduled to visit Amethi on April 13 and her representative Vijay Gupta has already started meeting officials to finalise the details of her programme. The minister is expected to announce some more developmental projects for Amethi.

While Ms Irani will be visiting Amethi on April 13, Congress president Rahul Gandhi will visit his constituency three days later on April 16.

Mr Gandhi will be in Amethi on a two-day visit and will hold impromptu ‘chaupals’ in various villages where he will interact with the local people. The Congress president, who represents Amethi in Lok Sabha, will also attend a meeting with local officials to make an assessment of the progress of development in his constituency.

Amethi has been the focal point of faceoff between Ms Irani and Mr Gandhi since 2014 when Ms Irani unsuccessfully contested the Lok Sabha elections.

After she lost the seat to Mr Gandhi, Ms Irani vowed to continue working for the people and she has kept her promise. Apart from making regular visits to Amethi, meeting people from the constituency in Delhi, Ms Irani sent saris for poor women during Diwali and announced that she would be arranging for 10,000 cows for BPL families in the constituency.

Congress MLC Deepak Singh, meanwhile, said that the BJP was trying to fool the people with such schemes.