UP: Father of woman raped by BJP MLA dies in custody, 6 cops suspended

Pappu Singh, 50, was in judicial custody after a complaint was filed by his daughter's alleged rapists. 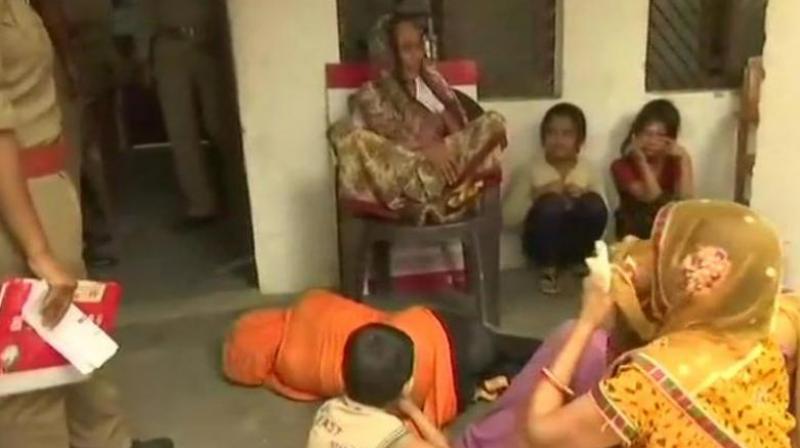 An 18-year-old woman from Uttar Pradesh's Unnao had alleged rape by BJP MLA and his brother and attempted suicide along with her family members by trying to immolate herself outside CM Yogi Adityanath's home on Sunday. (Photo: ANI | Twitter)

Unnao: The father of 18-year-old woman from Uttar Pradesh's Unnao, who had alleged rape and attempted suicide along with her family members by trying to immolate herself outside Chief Minister Yogi Adityanath's home on Sunday, died on Monday morning at the district hospital.

Pappu Singh, 50, was in judicial custody after a complaint was filed by his daughter's alleged rapists. He was reportedly beaten up by their men last week. He was rushed to a hospital from the district jail on Sunday night and died during treatment on Monday.

Read: UP: Father of woman raped by BJP MLA dies in police custody

As many as six police personnel were suspended and four accused were arrested for allegedly beating up a rape victim's father here.

"Two police officers and four constables have been suspended, while four accused of beating the rape victim's father have been arrested," said Unnao Superintendent of Police (SP), Pushpanjali Devi.

District Magistrate Ravi Kumar NG said that the postmortem examination of the victim would be conducted by a panel of doctors to ascertain the cause of death.

Pappu was arrested on April 5 under the Arms Act after he was allegedly beaten up by Anil Singh, the MLA's brother.

The 18-year-old woman had alleged that she was raped by BJP MLA from Unnao in Uttar Pradesh Kuldeep Singh Sengar and his brother in 2017, but the police refused to take any action or register any case against them. She also claimed that her family was threatened after they tried to file an FIR (First Information Report).

Last Tuesday, her father was allegedly assaulted by Kuldeep Singh Sengar, his brother and their associates, but an FIR was filed against the woman's father and he was arrested. On Sunday, when the man complained of abdominal pain, he was taken to the district hospital where he died.

"The incident happened while the man was in judicial custody. Magisterial inquiry will be conducted. If there have been lapses by the police, action will be taken," Deputy Inspector General of Police Pravin Kumar said.

Before attempting to immolate self, the woman had said she was raped and despite her family's pleas, no action was taken by the police. "I want all of them arrested otherwise I will kill myself. I had even gone to the chief minister with no result. When we tried to file a complaint, we were threatened," the woman had said.

Also Read: UP woman tries to kill self outside Yogi’s house, says BJP MLA raped her

Sengar, who has been a leader with the Samajwadi Party and Bahujan Samaj Party earlier, has denied the allegations.

"It's a conspiracy hatched by my political opponents to damage my reputation... I have no problems with any probe. Let a probe be conducted, and the guilty be given the stringent punishment. If I am found guilty in the probe, I am ready to face the punishment," Sengar told news agency PTI.