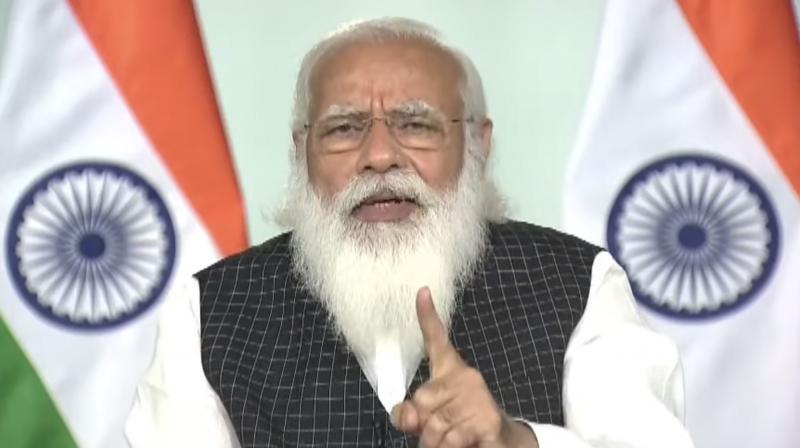 New Delhi: On a day India recorded about 1.32 lakh fresh cases of Covid-19, Prime Minister Narendra Modi conferred with the Chief Ministers of several states in virtual mode to discuss the surging Covid-19 infections and the vaccine strategy.

He told the Chief Ministers to strengthen their efforts for the next 2-3 weeks to check the spread of the virus on a “war-footing” and to focus on vaccinations and testing and hold a special drive — ‘vaccine festival’— from April 11 to 14 to cover all eligible beneficiaries over 45. He also asked the states to prevent vaccine wastage.

He defended the eligibility criteria for vaccination amid demand by some states, ruled by Opposition parties, to open the vaccination for all above 18 years. India's criteria is no different from the most prosperous countries in the world, Modi said.

States like Odisha, Andhra Pradesh, Telangana, Maharashtra, Haryana and Chhattisgarh have complained to the Centre regarding the shortage of oxygen, remdesivir and vaccine supply and said the vaccine drive will be severely impacted due to this.  Union health minister Harsh Vardhan dismissed these allegations, saying enough vaccines had been given to the states.

Earlier in the day, the Prime Minister took the second dose of Covaxin at the All-India Institute of Medical Sciences (AIIMS) in New Delhi. Kerala Chief Minister Pinarayi Vijayan, meanwhile, tested positive for Covid-19. He had taken the first dose of the vaccine on March 3.

Addressing the meeting, Odisha Chief Minister Naveen Patnaik said his state has vaccine supply only till Friday, while several vaccine centres in Maharashtra had to be closed for the want of vaccines.

Maharashtra health minister Rajesh Tope on Thursday attacked the Centre for playing politics during the pandemic by giving more vaccines to BJP-ruled states and fewer to non-BJP governed states.  He accused the Centre of giving Maharashtra only 7.5 lakh doses against its demand for 40 lakh vaccines. The minister said the state was aiming to vaccinate five to six lakh people daily to break the chain of transmission.

Tope also held meetings with the manufacturers of Covid-19 drug Remdesivir and asked them to double the production for the state. In order to increase beds for patients, the Pune administration has tied up with the Army Hospital to provide 40 ICU beds.

Health minister Harsh Vardhan said: “The hue and cry by certain states about partisanship by the Union government is just a farce, an attempt to hide their own incompetence. Maharashtra and Rajasthan are two of the top three states based on the allocation of Covid-19 vaccine doses. Both are non-BJP governed states. Let’s put an end to the fear-mongering now! Covid-19 vaccine doses: Total administered: 9 crore plus, in stock/nearing delivery to states: 4.3 crore plus. Where does the question of shortages arise? We’re continuously monitoring and enhancing supply.”

According to him, Maharashtra was given 1.06 crore vaccine doses, Gujarat 1.05 crore and Rajasthan 1.04 crore, while the country’s average distribution was 37.11 lakh.