AAP MLA Alka Lamba claimed that old EVMs were used for the MCD polls, in which the BJP won in a landslide. 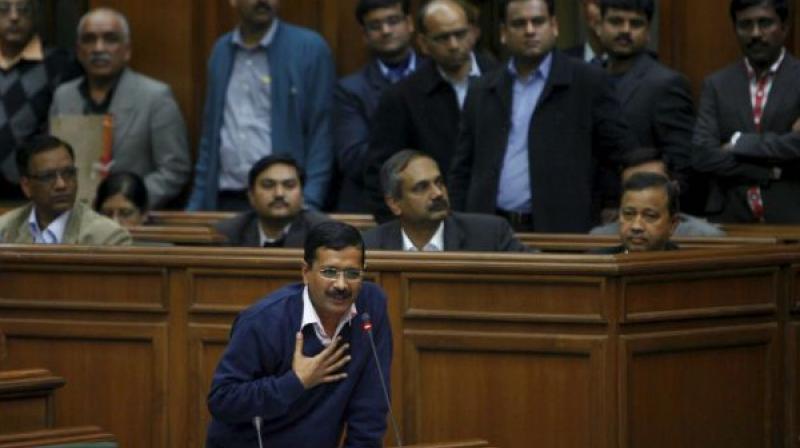 Amid turmoil in his party, Arvind Kejriwal had tweeted last night, 'Truth will triumph'. (Photo: PTI)

New Delhi: The Aam Aadmi Party shifted focus Tuesday from the bribery scandal involving its chief Arvind Kejriwal and called a special Assembly session to demonstrate its pet peeve – EVMs are faulty and help only a particular party to win.

Each constituency has such a code for every party contesting, which is "set in the EVM around 10 am". Votes polled after that register in the name of the "selected candidate", Bharadwaj said.

Before the demonstration, the former minister clarified it was being conducted on a machine similar to an EVM and not the original.

He began the demonstration by explaining the different parts of the voting machine he had carried to the Assembly, then did a mock voting on it, before explaining the “secret codes” theory.

He then inserted a code (the BJP’s) and “showed” that votes polled for other parties had not registered, while the BJP’s tally was more than the actual votes polled by him in the mock drill.

It was not very clear what this ‘expose’ finally meant. Was AAP alleging that the Election Commission was in cahoots with a party to rig machines, or blaming EVM manufacturers?

The House began in turmoil – Kejriwal had tweeted he would expose a big conspiracy on an "issue now raging in the country." BJP MLAs were raucous at the beginning of the session forcing Speaker Niwas Goel to expel MLA Vijender Gupta for disrupting proceedings.

AAP MLA Alka Lamba in her opening speech said: “This is not the first time that questions have been raised against EVMs. In Uttar Pradesh too, people said they never voted for the BJP.”

Lamba claimed that old EVMs were used for the recent Delhi civic body polls which the BJP won in a landslide. As a case in point, she said that in one ward in South Delhi, where AAP candidate Pinky Tyagi lost to her BJP rival Anita Tanwar by 2 votes, the EVMs used had counted several thousand additional votes.

The AAP also invited JD(U) and Trinamool leaders to the House to witness the demonstration.

EVMs have been in the news after BSP chief Mayawati blamed them for her poor showing the Uttar Pradesh Assembly polls. The AAP and Congress latched onto the issue demanding paper ballots in the Delhi civic polls.

The Election Commission has ruled out any manipulating of EVMs, stating the machines were tamper-proof.

EVMs, however, are now under the scanner of a parliamentary panel. It has invited Indian as well as international observers to check if they can be tinkered with.