CM Pinarayi Vijayan said he would bring the matter to the Centre's notice, adding that the police has been asked to examine the incidents. 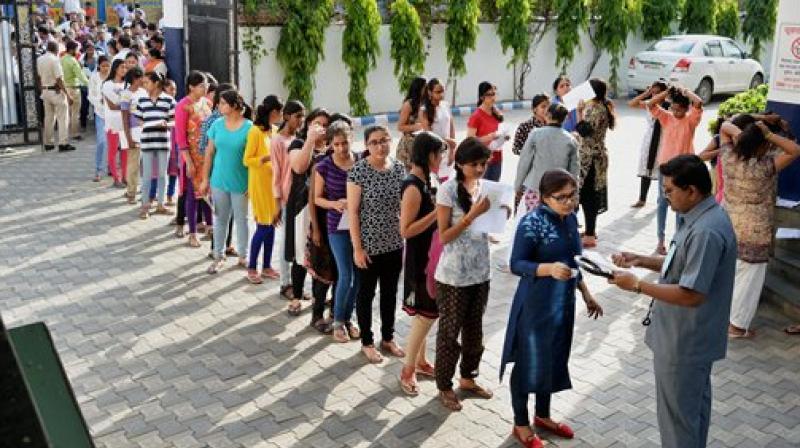 Candidates being checked before appearing for the NEET exam on Sunday. (Photo: AP)

Responding to concerns expressed by members of the House on the issue, Chief Minister Pinarayi Vijayan said he would bring the matter to the Centre's notice, adding that the police has been asked to examine the incidents.

The strict adherence to the Central Board of Secondary Education's (CBSE) anti-cheating dress code for those appearing for the NEET-UG for BDS and MBBS aspirants, held on May 7, has come in for criticism after several students were asked to remove their head scarves, nose-pins and cut sleeves of their tops.

A student in Kannur was asked to remove her bra as it had a metal hook, while another was forced to pluck out a metal button from her jeans and later asked to purchase new clothes as the jeans had pockets. Many students also had to cut the sleeves of their tops.

The matter was raised in the assembly through a submission and both ruling and opposition benches unanimously condemned the incidents.

Vijayan said the incident of the girl student removing her inner wear would be examined legally after registering a case. "A woman police official has been directed to meet the student and her parents," he said.

Complaints had been received from two centres in Kannur regarding the physical frisking of students, Vijayan said. The sleeves of their dresses were cut and some students were forced to remove their clothing, including inner wear, causing a lot of mental pressure, he said.

"This will be brought to the Centre's notice," he said. A student was not permitted to write the examination at a centre in Ernakulam district. This also would be examined, the left leader said without elaborating.

Some students appearing for the test had to 'undergo unnecessary mental agony', he said, adding police officials have been directed to examine the incidents.

Attacking the norms laid down by CBSE for NEET, Leader of the Opposition Ramesh Chennithala said stripping of students and using metal detectors for physical examination was 'cruel, inhuman and insulting' which created mental pressure on the students.

"Students had to beg, borrow and buy new dresses to appear for the examination after they were told that their clothing was not as per norms," he said.

This is human rights violation, the Congress leader charged, adding they had not come with bombs and pistols to write the test.

The CBSE norms are an 'insult to humanity', Chennithala said while urging the Assembly to unanimously pass a resolution against such norms. The matter was also raised briefly yesterday in the state assembly.