A student was forced to remove her bra, while another girl had to change her jeans before being permitted to appear for the test. 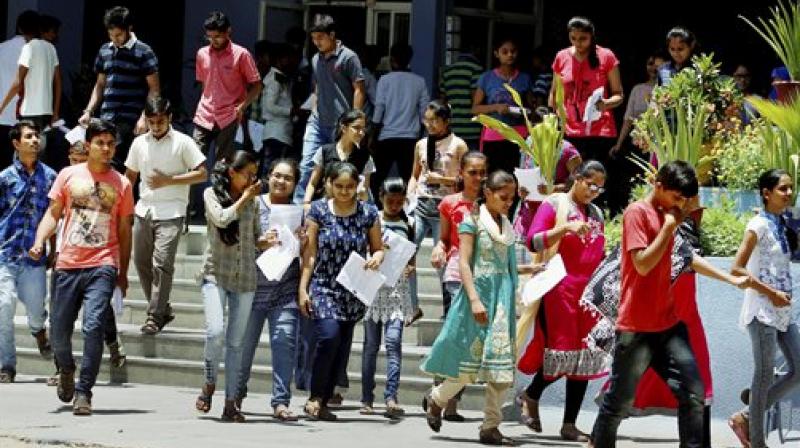 Students coming out of an examination centre after appearing in National Eligibility-Cum-Entrance Test (NEET) on Sunday. (Photo: AP)

Kannur: Four teachers were on Tuesday suspended on pending inquiry for allegedly forcing students to take off their clothes, including inner wear, as part of strict measures to stop cheating in a national medical entrance examination on Sunday.

Jamaluddin K, the principal of TISK English Medium school, one of the centres where the National Eligibility-cum-Entrance Test was held in Kannur district, said that four women teachers have been suspended pending inquiry though he is yet to receive any complaint.

In a shocking incident, a student was forced to remove her bra before being permitted to appear for the test, while another girl had to change her jeans as it had pockets with metal buttons. The issue echoed in the Kerala Assembly on Tuesday, with treasury and opposition benches condemning it.

Responding to concerns expressed by members of the House on the issue, Chief Minister Pinarayi Vijayan said he would bring the matter to the Centre's notice and that the police have been asked to examine the incidents.

Vijayan said the incident of the girl student removing her inner wear would be examined legally after registering a case. "A woman police official has been directed to meet the student and her parents," he said.

The chief minister had in a Facebook post on Monday said 'forcibly implementing such regulations in the name of dress code cannot be accepted by any civilised society'.

Parents of the affected children are also planning to write to the CBSE chairman and the National Human Rights Commission.

The strict adherence to the CBSE's anti-cheating dress code for those appearing for the NEET-UG held on May 7 has come in for criticism after several students were asked to remove their scarves, nose-pins and cut sleeves of their tops.