Rajnath Singh assured the VC of all help from the govt in restoring normalcy in the university, an official privy to the meeting said. 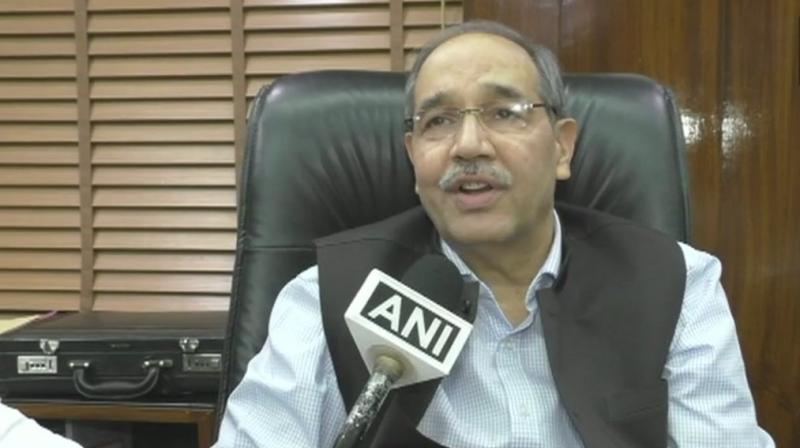 The vice-chancellor said the portrait of the Pakistan founder had been hanging in the Aligarh Muslim University students' union office since 1938 and it was a non-issue. (Photo: ANI/Twitter)

Rajnath Singh assured Mansoor of all help from the central government in restoring normalcy in the university, an official privy to the meeting said.

Mansoor later told reporters that the meeting was fixed long ago and had nothing to do with the current controversy.

"I have requested the home minister to send Central government officials for the recruitment of students in central services like the engineering service," he said.

The vice-chancellor said the portrait of the Pakistan founder had been hanging in the Aligarh Muslim University students' union office since 1938 and it was a non-issue.

BJP MP Satish Gautam had written a letter to Mansoor objecting to the portrait, triggering a row that led to two youths being arrested in connection with incidents of violence and exams being postponed to May 12.

The vice-chancellor had on Tuesday told students on a sit-in over the issue to get back to their studies.

In an open letter, he urged them "not to fall into the trap of certain forces which are bent upon destroying the image of our alma mater and are playing with your bright future".

The university has formed a 16-member coordination committee of senior faculty members to talk with the protesting students.

Several Aligarh Muslim University students are on an indefinite 'dharna' after a clash with the police on May 2 when they were demanding action against right-wing protesters who had entered the campus, shouting slogans.

They are asking for a judicial probe into the "police inaction" and the manner in which the row erupted after the BJP MP objected to the portrait.