Outrage in J&K at tourist’s death in stone-pelting

22-year-old R Thirumani who was admitted to hospital with serious injuries on Monday morning, slipped into coma and died in the evening. 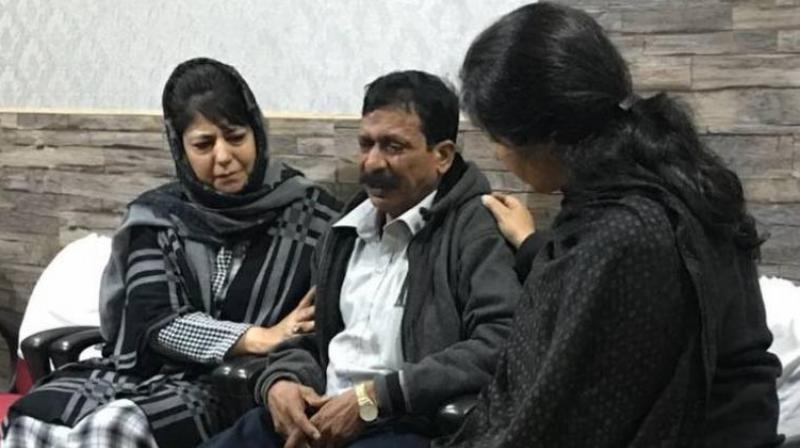 Srinagar: The death of a 22-year-old tourist from Chennai in a stone-pelting incident at Narabal on the outskirts of Srinagar on Monday has evoked widespread outrage in the state and beyond. Chief minister Mehbooba Mufti said she was ashamed that a person who had come all the way from far-off Tamil Nadu to spend his leisure in the Valley was killed in stone-pelting.

R. Thirumani, a resident of Avadi in Chennai, had studied at DRBCCC Hindu College and was working at Accenture in Chennai. He, along with three other members of his family, including his parents, reached Srinagar on Sunday on a five-day trip to Kashmir. The next morning, they hired a Tavera cab to relocate to the Valley’s premier resort Gulmarg. Around 7 am, when the vehicle was passing through Narabal along the Srinagar-Gulmarg road, it was attacked by stone-pelters, resulting in critical injury to Thirumani, police sources said.

He was rushed to Srinagar’s Sher-e-Kashmir Institute of Medical Sciences, where he succumbed to his injuries on Monday evening, officials said.

Doctors said he had been hit in forehead and face and that they had done two CT scans on him and were going ahead with his treatment when all of a sudden he had convulsions and breathed his last. His corpse was later shifted to the police hospital here, before being flown to Chennai.

Strongly condemning the incident, the chief minister said R. Thirumani’s death was “heartbreaking” and it goes against the Kashmiri ethos of hospitality and respect for guests. “I’ve no words strong enough to condemn this tragic incident or even condole with the family”, she said.

Ms Mufti described the incident as a “blot” on the cultural value system of Kashmir and an attempt to bulldoze the economy of the state. She also said that immediately on learning about the incident at 9 pm on Monday, she rushed to the police hospital in Srinagar and condoled with the parents and fellow tourists of the victim. She conveyed the sympathies of the people of the state to the bereaved family and asked the administration to extend all support.  The CM also expressed concern over the injuries caused to a girl from Handwara (Kashmir) in the same incident, and wished her a speedy recovery. Ms Mufti also took to Twitter early on Tuesday to condemn the incident. She said: “It’s truly heartbreaking when a family saves for years to realise their dream of visiting Kashmir & while they are here they face their worst nightmare. I have no words strong enough to condemn this tragic incident or even begin to condole the family.”

Kashmir’s chief Muslim cleric and chairman of his faction of the Hurriyat Conference, Mirwaiz Umar Farooq, also condemned the incident. CPI(M) state secretary Mohammad Yousuf Tarigami, condemning the incident, asked: “Whose ‘cause’ is fulfilled by such brutal killings?”