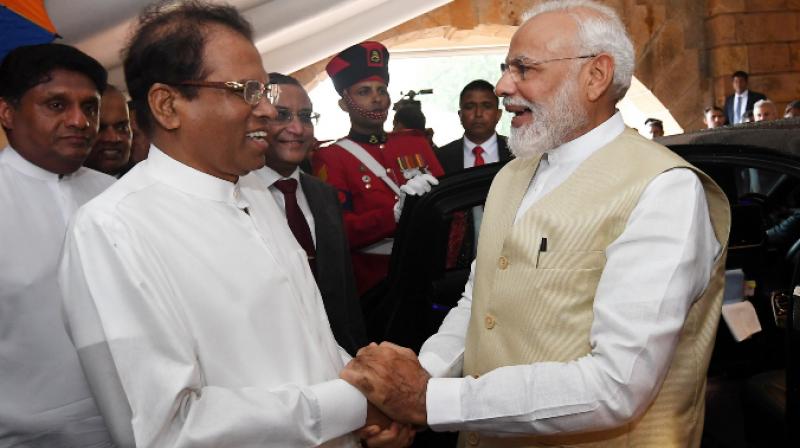 PM Modi had met President Sirisena in New Delhi last month when the latter was invited to attend the former's swearing-in ceremony.

PM Modi tweeted about his meeting with President Sirisena:

President Sirisena and I agreed that terrorism is a joint threat that needs collective and focussed action.

Reiterated India’s commitment to partner with Sri Lanka for a shared, secure and prosperous future. pic.twitter.com/gDkV2vikcM

As a special gesture, PM Modi was gifted a Buddha statue by President Sirisena during his visit. PM Modi took to Twitter to convey his gratitude.

A special gift from a special friend.

This is considered to be one of the best sculptures in the Anuradhapura era.

The original statue was sculptured between the 4th and 7th centuries AD. pic.twitter.com/tZO8xomPQ7

This replica of the Samadhi Buddha Statue has been hand carved using white teak. This masterpiece has taken almost two years to complete.

The meditation pose is known as Dhyana Mudra. pic.twitter.com/voruimNKOr

Had an extensive meeting with the Leader of Opposition, Mr. Mahinda Rajapaksa.

We discussed the need for close collaboration between India and Sri Lanka in the fields of counter terrorism, security and economic development. @PresRajapaksa pic.twitter.com/uOs7BSTBuH

A delegation of Tamil National Alliance led by R Sampanthan also called on PM Modi and congratulated him for his electoral victory.

PM Modi landed in Sri Lanka for a brief stopover on his way back to India from the Maldives where he was on his first overseas visit after assuming office for a second term.

The Prime Minister was received at the Bandaranaike International Airport in Colombo by his Sri Lankan counterpart Ranil Wickremesinghe.

PM Modi tweeted upon his arrival in the island country:

Happy to be back in Sri Lanka, my third visit to this beautiful island in four years. Share the warmth shown by the people of SL in equal measure. India never forgets her friends when they are in need. Deeply touched by the ceremonial welcome. @RW_UNP pic.twitter.com/wjZjKPno01

PM Modi's visit comes shortly after the Easter bombings. He started his visit by paying his respects at the affected site.

Prime Minister Modi is the first foreign leader to visit the nation after the terror attack.

Started the Sri Lanka visit by paying my respect at one of the sites of the horrific Easter Sunday Attack, St. Anthony's Shrine, Kochchikade.

My heart goes out to the families of the victims and the injured. pic.twitter.com/RTdmNGcDyg

I am confident Sri Lanka will rise again.

India stands in solidarity with the people of Sri Lanka pic.twitter.com/n8PA8pQnoJ

PM Modi was accorded a ceremonial welcome in the presence of Sri Lankan Maithripala Sirisena.

I am happy to share that the Indian community overseas and the Government of India are on the same page when it comes to several issues: PM @narendramodi

Later in the day, the Prime Minister will offer prayers at Tirumala temple in Tirupati, Andhra Pradesh before returning to New Delhi.