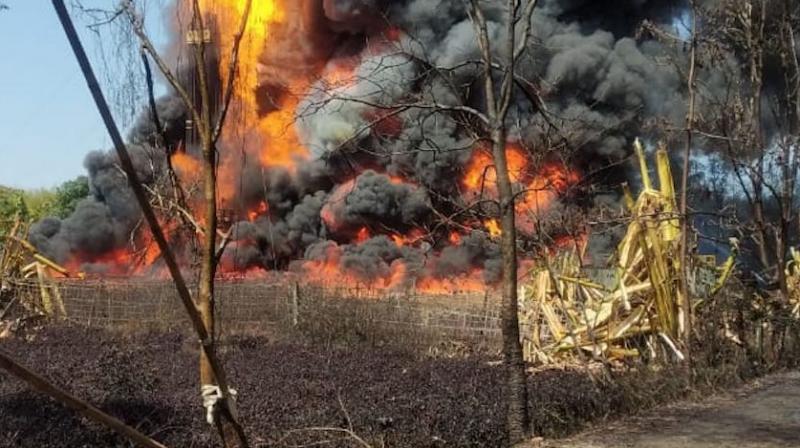 Guwahati: A day after Oil India Limited (OIL) brought three-member expert team from a Singapore-based emergency management firm to control the blow out in gas well, a massive fire broke out after a blast into the gas well, from which natural gas was uncontrollably flowing for the past 13 days, in eastern Assam.

Informing that the fire broke out at the well under Baghjan oil field in Tinsukia district on Tuesday afternoon when a team of experts from Singapore and local engineers were trying to control the flow of natural gas from the well since the blowout on May 27, the OIL authorities said that the experts had also expressed the fear of fire breaking out  in the well and all necessary precautions were taken.

However, panic has gripped the people of the surrounding areas after the fire broke out as black smoke billowing out of the mishap site was seen from miles away with hundreds of local residents fleeing from the nearby areas.

Earlier on Monday a three-member expert team from a Singapore-based emergency management firm had started operation to control the blow out in the gas well.

An OIL press release stated that after the preliminary discussion and de-briefing session, the experts from Singapore's 'Alert Disaster Control', led by Michael Ernest Allcorn, along with the OIL team, had started work on plugging the blow out.

The OIL statement further said, "The experts from Alert complimented OIL for all the preparatory works carried out so far and mentioned that based on their wide experience of handling over a thousand blowouts in around 135 countries all over the world under different conditions, they are confident of controlling the well at the earliest with necessary support from OIL.”

"They emphasised that safety of the local people in the area and the technical team working at the well site will be their prime concern while carrying out the operations," the OIL release said.

More than 650 families, comprising 2,500 people, have been shifted to three relief camps after the OIL's gas well at the Baghjan village had started releasing natural gas into the air after a leak on May 27.

Locals residents of the area alleged that the blowout has caused a massive oil spill in the Dibru-Saikhowa national park, about 3 km from the well, home to Gangetic River Dolphins and Hoolock Gibbons, both endangered as per IUCN red list.