Since the early morning, Mumbai and the surrounding districts witnessed a heavy downpour, causing flooding in several low-lying areas 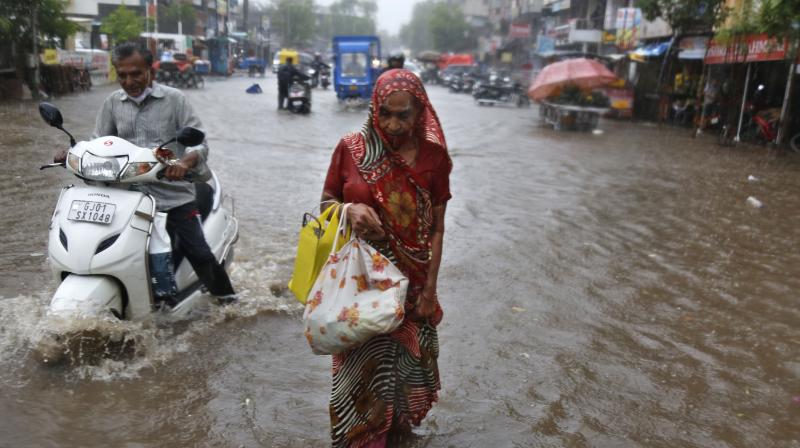 The IMD has issued a ‘red alert’ for Mumbai, and neighbouring Thane, Palghar and Raigad districts, warning of very heavy to extremely heavy rainfall at isolated places. — Representational image/AP

Mumbai: Mumbai was marooned on Wednesday as heavy rains lashed the city marking the arrival of monsoon. While the rail and train traffic was disrupted, several areas of the city witnessed water-logging bringing the normal life to a standstill. However, the majority of people were spared from the misery due to the ongoing Covid restrictions, which averted them to venture out of their homes.

Since the early morning, Mumbai and the surrounding districts witnessed a heavy downpour, causing flooding in several low-lying areas. The roads and rail tracks went under the water, suspending the road traffic and suburban train services. Routes of some city municipal buses, were diverted to avoid flooded streets. However, by late afternoon, the rainfall intensity reduced bringing much relief to Mumbaikars.

According to the India Meteorological Department (IMD) officials, Mumbai received 220.6 mm of rainfall till 5.30 pm on Wednesday. The IMD has issued a ‘red alert’ for Mumbai, and neighbouring Thane, Palghar and Raigad districts, warning of very heavy to extremely heavy rainfall at isolated places.

“Due to strengthening of westerly winds along west coast due to low pressure area over Bay on 11 Jun: widespread rainfall activity with heavy to very heavy rainfall likely to continue over Konkan during 9-15 June,” he further tweeted.

Several areas of Mumbai like Hindmata, Parel, Sion, Kings Circle, Matunga, Wadala, Dadar, Juhu, Jogeshawri witnessed flooding on Wednesday. The traffic police closed Milan, Khar, Andheri and Malad subways for motorists due to water-logging at these places. Cranes were used to clear roads on which motorists had abandoned their vehicles due to water-logging. The city police appealed to Mumbaikars not to step out of their homes unnecessarily and cautioned them against travelling to some of the inundated areas.

Maharashtra Chief Minister Uddhav Thackeray took a review of the situation by speaking to the officials of Brihanmumbai Municipal Corporation (BMC) and collectors of Thane, Palghar, Raigad, Ratnagiri and Sindhudurg districts. He directed the officials to ensure proper relief work for people living in coastal areas.

Meanwhile, Maharashtra BJP leader Ashish Shelar alleged that the BMC’s shoddy pre-monsoon preparation works resulted in flooding of Mumbai city. “The BMC’s claims of carrying out 104 per cent desilting works of nullahs, sewers and open drains before the monsoon have proved hollow in the very first rains. In five years, Rs 1000 crore have been spent on desilting works, but the situation remains the same,” he said.

However, mayor Kishori Pednekar rubbished his claims saying the water-logging did not exist for long in the city. “We never said that there will be no flooding in city. It was bound to happen due to incessant rains. But, we ensured that the accumulated water receded quickly,” she said.