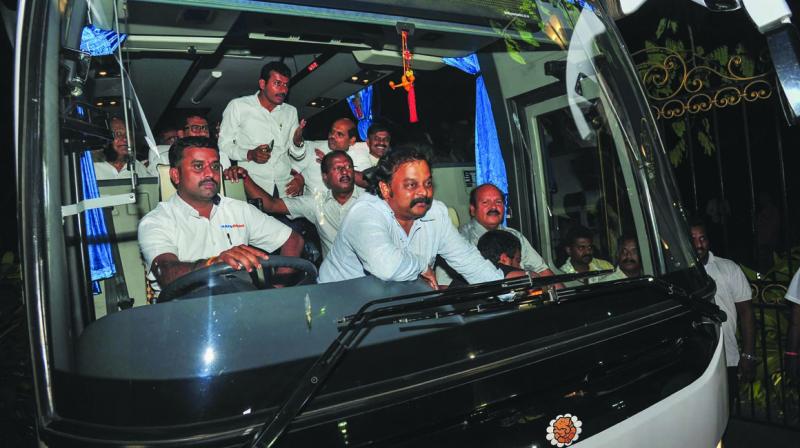 JD(S) MLAs in a bus leave a hotel in Bengaluru on Monday. (Photo: PTI)

Bengaluru: The Karnataka government continued to teeter on the brink of collapse on Monday as two Independent MLAs — R. Shankar and H. Nagesh — who were perceived as close to the JD(S) and inducted into the Cabinet two weeks ago as part of the strategy to ensure stability of the government, handed their resignation letters to governor Vajubhai Vala and announced their support for the BJP. They later joined other rebels in Mumbai and Goa.

In a bid to save the troubled Janata Dal (S)-Congress government, all 30 Karnataka ministers of the alliance were nudged into putting in their papers on Monday after a breakfast meeting at the residence of deputy chief minister Dr G. Parameshwar, leaders of both parties went into an overdrive to save their 14-month old government. Chief minister H.D. Kumaraswamy, who did not resign on Monday, claimed that the crisis will blow over.

However, as two Indepe-ndents — R. Shankar and H. Nagesh — quit the Cabinet on Monday and pledged their allegiance to the BJP, boosting the saffron party’s numbers to 107 in the 224-member Assembly, the ruling coalition’s numbers have rapidly shrunk to 104, and could drop even further as the Congress’ Muslim face and Shivajinagar MLA Roshan Baig told The Asian Age that he too would quit on Tuesday.

In all, 15 MLAs from the ruling alliance have resigned till now.

A second round of resignations could bring numbers crashing even further. According to top sources in state BJP close to former chief minister B.S. Yeddyurappa, Cong-ress MLAs of Khanapur (Anjali Nimbalkar), Jayanagar (Sowmya Reddy) and Bagepalli (Subbareddy), are likely to submit their resignations to the Speaker.

The BJP has planned to get another 10 MLAs to resign to reduce the combined ruling coalition’s numbers to below 100.

The BJP is trying to persuade another two Cong-ress MLAs, V. Muniyappa from Sidlaghatta and Srinivasagowda from Kolar, to quit.

In a behind-the-scene bid at damage control, chief minister H.D. Kumaras-wamy met former minister R. Ramalinga Reddy at an undisclosed location and tried to persuade him to withdraw his resignation letter. Mr Ramalinga Reddy reportedly told Mr Kumaraswamy that he would not withdraw his resignation, nor would he take up any assignment, and has not yet decided if he wants to come back to the Congress fold.

City Congress MLAs are deeply upset at the arbitrary manner in which deputy chief minister Dr Parameshwar has run the city as minister in-charge of Bengaluru, cutting them out of the picture.

Mr Yeddyurappa informed his party MLAs that they would receive “good news” in a day or two and asked all of them to remain in Bengaluru. Addressing a BJP Legislature Party meeting, Mr Yeddyurappa said the saffron party’s “Vanavasa” will come to an end in two days.

Speaker Ramesh Kumar has to take a decision on the MLAs’ resignations on Tuesday, he said.

“Mr Kumaraswamy should resign and leave on his own. His father H.D. Deve Gowda preaches political morality to all, why can’t he tell his son to resign since the coalition government has lost its majority following the resignation of 13 MLAs,” Mr Yeddyurappa said.

“Our leaders and workers will protest on Tuesday across the state demanding the resignation of the chief minister. We have got the support of two Independent MLAs and our strength has increased to 107 in the Assembly,” Mr Yeddyurappa said.

If Mr Kumaraswamy refuses to resign, all BJP MLAs will gather at Gandhi statue at Vidhana Soudha on Wednesday to exert pressure on him, he said.

On Saturday, 10 Congress and three JD(S) MLAs had submitted their resignation letters to the Speaker’s office, upset over being sidelined by the coalition government. On Monday all 15 disgruntled legislators were moved from Mumbai to Goa, under the eagle eye of BJP functionaries, with not one of them responding to Congress Legislature Party (CLP) leader Siddaramaiah’s plea to return as part of HDK’s purported plans for a complete overhaul of the ministry.

The 21 Congress ministers who quit their posts did so in “the larger interest of the party”, party general secretary in-charge of Karnataka K.C. Venugopal claimed.

Mr Siddaramaiah said, “Yesterday and today, we had detailed discussions with senior leaders and ministers who agreed to give the party full freedom to reshuffle the ministry.”

Mr Kumaraswamy lashed out at the BJP, blaming its top brass of the BJP for triggering the latest crisis plaguing the government, while insisting that “the government will survive”.

Meanwhile, all eyes are on Speaker K.R. Ramesh Kumar who is scheduled to return to office on Tuesday and take a decision on resignation letters submitted by rebel legislators of the ruling coalition.

The Speaker is likely to summon the rebel legislators individually and confirm their resignation before accepting them. In case all the resignation letters are accepted, the strength of the coalition would slip below the 113-mark that is required for the coalition to remain in office.

The BJP was shrill in demanding Mr Kumaraswamy’s resignation, saying his government is in “minority”.

“If at all he has dignity, honour and self-esteem, or if he is aware of Karnataka’s culture and traditions, he should immediately resign. Do not try to stick on to the chair. You do not have the numbers,” former deputy chief minister R. Ashok told the media.

In order to prevent another setback, JD(S) MLAs were swiftly herded to a resort on the outskirts of Bengaluru, with initial reports indicating that a five-star resort in Coorg was their destination until they were taken in a bus to an unknown destination on Monday night. They are only expected to return to the state capital on Friday.

Sources said Ms Reddy, a first-time MLA, reportedly explained to party leaders about her father’s decision to quit. She reportedly held a one-on-one meeting with every senior leader, including UPA chairperson Sonia Gandhi, to explain the circumstances in which Mr Reddy was forced to take the step, sources said.

She has also scotched rumours about her not attending the crucial Congress Legislature Party meeting which is scheduled on Tuesday. “I am coming from New Delhi to attend the CLP meeting tomorrow,” she tweeted.