India   All India  09 Jul 2020  Coronavirus recovery rate in India up even as cases mount
India, All India

Coronavirus recovery rate in India up even as cases mount

With more COVID-19 patients recovering, the gap between the number of recovered cases and active cases has increased by 1,91,886 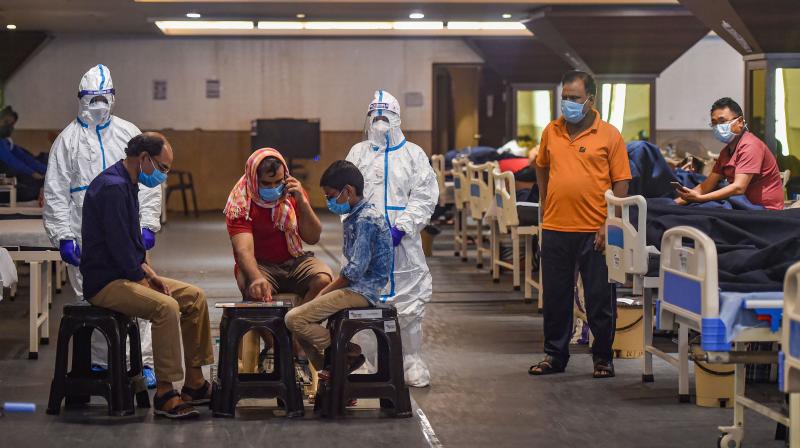 The recovery rate in India is fast picking up as on Wednesday it reached 61.53 per cent, and the gap between the infected and recovered too widened.

During the last 24 hours, 16,883 patients of novel coronavirus were discharged taking the cumulative figure of recovered cases to 4,56,830 so far while 2, 64, 944 are still under medical supervision.

With more COVID-19 patients recovering, the gap between the number of recovered cases and active cases has increased by 1,91,886 as on date.
India on Wednesday recorded a total 7,21, 417 COVID-19 cases overall out of which 22,752 were fresh cases.

The deaths so far in the country is 20, 642 out of which 482 fatalities occurred in the last 24 hours. Cases are picking up in southern states of Tamil Nadu, Telangana, Karnataka and Andhra Pradesh while the situation in Maharashtra and Delhi is slowly improving.

Maharashtra reported just 6,603 fresh cases as COVID-19 cases in Mumbai’s Dharavi come under control. However, Maharashtra still has the highest number of total cases – 2, 23, 724 — and highest numbers of deaths – 9448 out of which 198 were on Wednesday.

However, as cases pick up in Bihar, the state government has decided to put Patna, Bhagalpur and some other places under lockdown from July 9 to 16 during which only essential services shops will be allowed to remain open.
Economist Prof Steve Hanke of Johns Hopkins University has pointed out that higher cases in India are due to lack of medical infrastructure and under testing.

“Even with its hard #Lockdown,  #India now has the 3rd highest number of #COVID19 cases. No surprise. Just as I predicted: A #Modi #LockdownFailure. A lockdown does not make more #Hospital beds or #Tests,” he tweeted.
However, the union health ministry officials said that higher testing has led to more detection of cases which is helping in containing the situation.

The World Health Organisation has acknowledged emerging evidence of airborne spread of the COVID-19. The WHO said it would put out a new scientific brief within days.

CIPLA has launched 'CIPREMI' the generic version of Remdesivir. The company CEO Nikhil Chopra said that the drug is amongst the lowest priced globally, and CIPLA aims to supply over 80,000 vials within the first month itself.

“To further ensure equitable distribution, CIPREMI will be available via Government and Hospital channels only. Cipla will also be donating some amount of the drug as part of its efforts to support the community in this time of need,” Mr Chopra said.