Bari, a former district president of the BJP, and his kin were targeted by two gunmen inside their family shop. 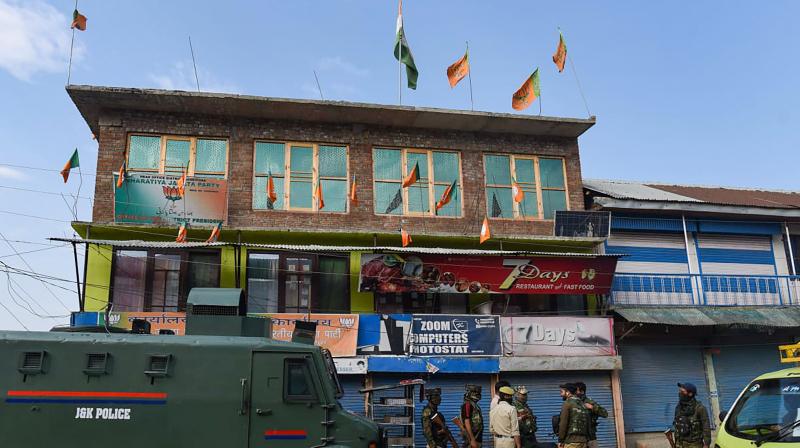 J-K Police outside the residence of Waseem Bari. (PTI)

SRINAGAR: The Resistance Front (TRF), an obscure outfit, has owned responsibility for killing local BJP leader Sheikh Waseem Bari and his father and brother in Jammu and Kashmir's Bandipore.

Bari, a former district president of the BJP, and his kin were targeted by two gunmen inside their family shop on the ground floor of their roadside house in Muslimabad area of Bandipore, 66-km north of J&K’s summer capital Srinagar, at 8.45 pm on Wednesday.

The TRT, in a brief statement said, “Political stooges who ever sabotage Kashmir cause with their filthy designs to make/ help occupational regime in brutalising  Kashmiris will be dealt with dire consequences (sic)".

Inspector General of Police, Vijay Kumar, claimed that the attack was carried out by two Lashkar-e-Tayyaba (LeT) militants, including a local Abid and the other being a Pakistani national. He said the attack was "preplanned".

He also said that all the ten Personal Security Officers (PSOs) deployed for Bari’s protection in view of the persistent militant threat to his life have been dismissed from service and arrested as well over their ‘negligence from duty’.

The IGP said that Bari's police guards had returned to the guard room on the first floor of the politician's roadside house after escorting him during a visit to a Bandipora neighborhood when the attack took place. Bari, his father Bashir Ahmed and brother Umar Bari were rushed to a nearby hospital where doctors declared them brought dead.

Kumar, who visited the site of the shooting along with the DIG North Kashmir and SSP Bandipora, said he examined the CCTV footage at the Bandipora Police Station which is situated opposite to the slain BJP leader’s house. “We’ve checked the CCTV footage in presence of the Army and CRPF officers. Two terrorists from Lashkar-e-Tayyaba have carried the attack. One is a local who has been identified as Abid and another is a foreigner-a Pakistani”.

The IGP said, “The local militant Abid fired at the trio from a close range with a pistol while the other one was guiding him. We will track both the terrorists soon and eliminate them.”

He said that the attack was “pre-planned”, as the BJP leader had visited his ward before returning to his home along all the PSOs. “After entering his house, his PSOs had gone to their room and Bari went to the family shop where his father and brother were also present,” the IGP said adding that the arrested policemen “are being questioned.”

The security forces officials combating the three-decade-old insurgency in Jammu and Kashmir believe the TRF, which surfaced a few months ago, is actually a front of LeT, indigenous Hizb-ul-Mujahideen and other like-minded outfits to present a ‘secular outlook’.

The killings of Bari and his kin have been condemned by mainstream political leaders across the board. According to Union minister Dr Jitendra Singh, Prime Minister Narendra Modi, too, has condemned the incident and “extended condolences to the family of Waseem".