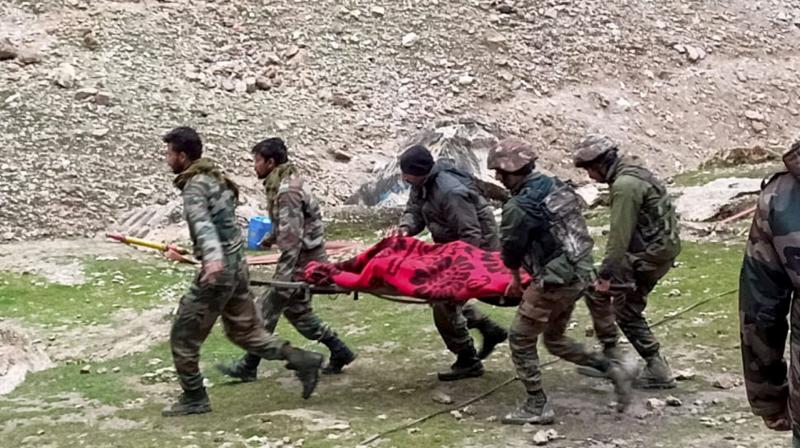 New Delhi/Srinagar: At least 16 people have been killed while 15,000 pilgrims, who were stranded near the Amarnath holy cave in Jammu and Kashmir due to a flash flood triggered by a cloudburst, have been shifted to the lower base camp of Panjtarni, officials said Saturday.

A Border Security Force spokesperson in Delhi said "16 bodies have been shifted to Baltal."

The ITBP has expanded its route opening and protection parties from the lower part of the holy cave up to Panjtarni, a spokesperson of the force said.

The pilgrimage that began on June 30 has been suspended following the tragedy and a decision on its resumption will be taken after rescue operations get over, a senior administration official had said.

"Most of the pilgrims, who were stranded near the holy cave shrine area due to the flash flood that occurred Friday evening, have been shifted to Panjtarni. The evacuation continued till 3.38 am.

"No pilgrim is left on the track. About 15,000 people have been safely shifted till now," the Indo-Tibetan Border Police (ITBP) spokesperson said.

The BSF spokesperson said doctors and medical staff of the force treated nine patients who were critically injured in the floods. "They have been shifted to lower altitude Neelgrath base camp," he said.

A small BSF team is also deployed at the Neelgrath helipad to assist the pilgrims coming from the cave shrine.

About 150 pilgrims stayed at the BSF camp set up in Panjtarni on Friday night and 15 patients have been airlifted to Baltal on Saturday morning, he said.

A Mi-17 chopper of the BSF's air wing has been pressed into service apart from similar assets of the Army.