4 die in stampede-like situation as lakhs turn up to pay their respects. 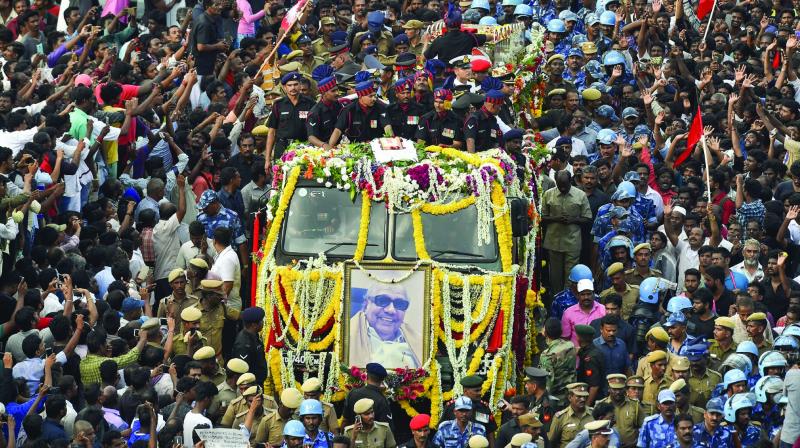 People gather to pay their last respects to DMK chief M. Karunanidhi as his cortege passes through the streets of Chennai on Wednesday. DMK leader M.K. Stalin. (Photo: Asian Age)

Chennai: Dravidian icon and DMK chief M. Karunanidhi was laid to rest beside his mentor C.N. Annadurai on Marina Beach on Wednesday evening as lakhs of people turned up to pay their last respects. Prime Minister Narendra Modi, Congress chief Rahul Gandhi and chief ministers of Karnataka, Kerala, Telangana and Andhra Pradesh were in attendance. As were film personalities Rajinikanth, Kamal Haasan and Khushboo among others.

Earlier in the day, when thousands had gathered for a last glimpse of the man lovingly called “Kalaignar” at Rajaji Hall, at least four people were killed and 35 injured, including a woman constable, in a sudden stampede-like situation.

The stampede happened at around 11.15 am when police was allowing people to enter the hall premises in batches, but several people breached the barricades. A few fell down and were trampled upon in the crush. 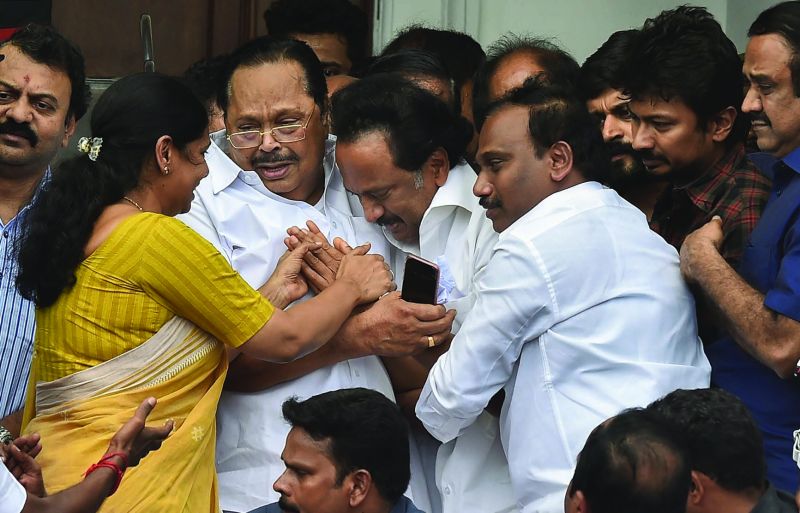 Breaks down after the Madras high court’s verdict to allow the burial of his father M. Karunanidhi at Marina Beach.

Police used force to bring the situation under control and soon after DMK working president M.K. Stalin appealed to party cadres and the public to keep calm and pay homage to their leader in an orderly, peacefully manner.

Karunanidhi’s journey from Rajaji Hall to Marina Beach, his final resting place, was marked with emotional scenes. Teary-eyed family members, including his sobbing sons and daughters Stalin, Alagiri, Tamilarasu, Selvi and Kanimozhi — paid floral tributes before the coffin holding his body was lowered into the ground at about 7 pm.

A towering figure of the Dravidian movement and Tamil Nadu politics, Karunanidhi was laid to rest with full state honours.

A 27-gun salute and buglers sounded the last post as his body, draped in tricolour with his trademark black glasses, yellow shawl, white shirt and dhoti on, was brought for burial in an open procession in a military gun carriage from the Rajaji Hall.

In keeping with his rationalist beliefs, Karunanidhi’s body, kept in a sandalwood casket, was lowered into the earth without any rituals.

The tricolour was removed by military personnel and handed over to Stalin before the coffin was lowered into the ground.

DMK working president Stalin was seen crying inconsolably after touching his father’s feet before the casket was lowered into the grave.

Stalin had wept in the morning too, after the Madras high court, headed by acting Chief Justice H. Ramesh, permitted Karunanidhi’s burial on Marina Beach.

The order came after a night-long drama over the ruling AIADMK’s refusal to give the five-time chief minister space at the beachfront which has memorials to three other former chief ministers, including Anna, MGR and J. Jayalalithaa. 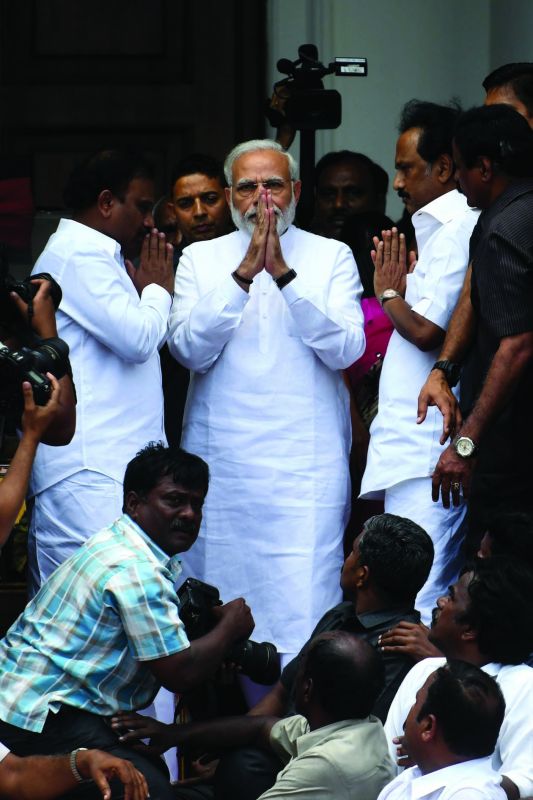 Alagiri and Tamilarasu too wept in front of their father’s body inconsolably, while an emotional Kanimozhi gently touched her father’s cheeks for the last time.

A sea of supporters lined up along the route to get a final glimpse of the departed leader raised slogans expressing their grief and support.

Many in the procession were clad in black shirts and displayed pictures and banners of the late 94-year-old leader who breathed his last at Kauvery hospital Tuesday evening, after battling with illness for 11 days.

The milling crowd became so huge by evening that the procession took a couple of hours to cover the short 2-km journey to his last resting place.

At the Marina, slogans like “Kalaignar pugazh vazhga vazhgavey” (long live the glory of Karunanidhi) rent the air as the tri-service military personnel lifted the glass casket containing the mortal remains and placed it at the memorial ground for final farewell.

Prime Minister Modi, who flew from Delhi in the morning, laid a wreath on the body at Rajaji Hall and spoke to Stalin and Kanimozhi.

Karunanidhi’s body was kept for a couple of hours at his Gopalapuram residence and later at his daughter Kanimozhi’s CIT Colony residence for public veneration, before being shifted to the Rajaji Hall in the early hours of Wednesday.

There was a complete shutdown in the city and across the state. The government had declared a public holiday as a mark of respect to Karunanidhi.

Muthuvel Karunanidhi, a man who began his political career at the tender age of 14, was buried next to his mentor, Dravidian ideologue and former chief minister, Annadurai at the Marina Beach that’s kissed by the Bay of Bengal.