People gather in large numbers to pay their last respects to DMK patriarch. 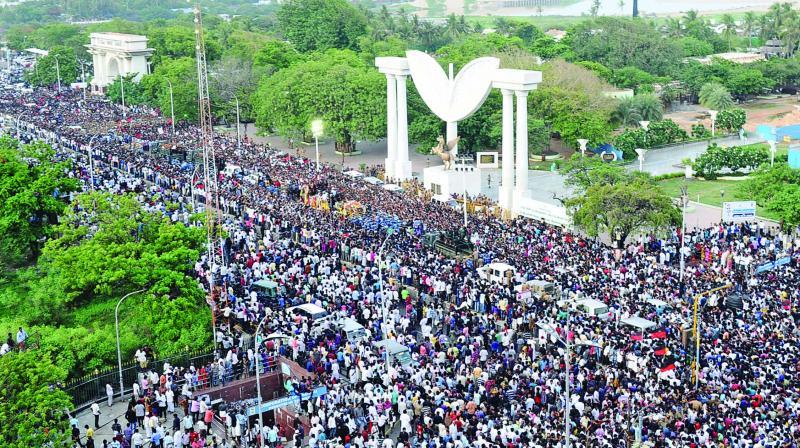 Chennai: At least a million people came to see DMK patriarch and former chief minister M Karunanidhi on the day of his funeral Wednesday. The crowds thronged all day at the Rajaji Hall to where his mortal remains were brought after having lain in his homes in Gopalapuram and CIT Colony during Tuesday night soon after he passed away in Kauvery Hospital.

Grieving DMK cadres were spread out all along the route of the cortege from the Rajaji Hall to the Marina Beach memorial space. The milling crowd became so huge by evening that the procession took a couple of hours to cover the short 2-km journey to his last resting place.

At least four persons were killed and more than 30 persons, including a woman constable, were injured in a sudden stampede at Rajaji Hall earlier in the day when thousands rushed and pushed to pay homage. The stampede happened at around 11.15 am when the police let the people enter the Rajaji Hall premises in batches and several persons breached the barricades in their hurry.

A few persons fell down and were trampled upon in the crush. Soon after the incident, DMK working president appealed to his party cadres and the public to keep calm and pay homage to the leader in an orderly manner and disperse peacefully. 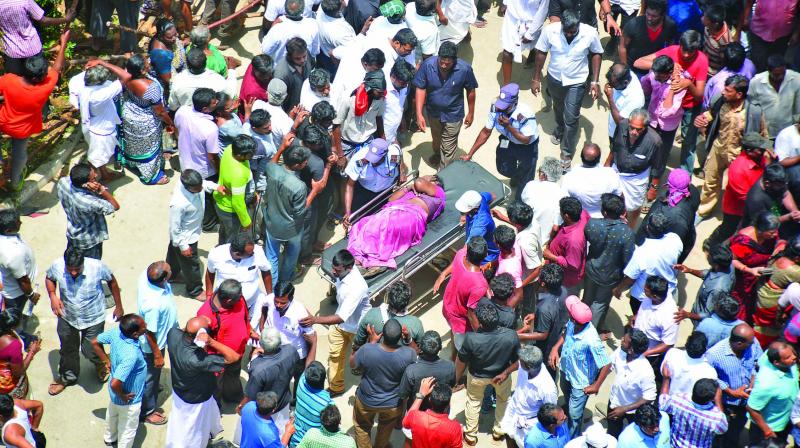 A woman injured in the stampede being carried out in a stretcher. (Photo: Asian Age)

The injured persons were sent to Rajiv Gandhi Government General Hospital (RGGGH) but Shenbagam (60) of MGR Nagar in Chennai and an unidentified man died on the way to the hospital. Another person – Saravanan (37) died at the hospital without responding to the treatment.

Anitha (45), a police constable who was posted in the Rajaji Hall as part of the forces for crowd control, also sustained injuries in the stampede. As many as eight persons are undergoing treatment in the RGGGH. Meanwhile, Durai (55) of Madurai, who suffered injuries had died in Omandurar Government Super-specialty Hospital without responding to the treatment. Three injured persons are undergoing treatment in the Super-specialty Hospital.

“The police were controlling the crowd well until the prime minister left after paying homage to M. Karunanidhi. The police made a mistake in crowd control soon after the PM left as they began allowing people in batches without considering the numbers present. Many people tried to reach the main entrance to the hall where the body was kept and from all sides, including from the adjacent Government super-specialty Hospital breaching the designated entry point,” sources said.