Today morning coffin decked with flowers was brought to his home in a military truck for last rites to be performed with military honours. 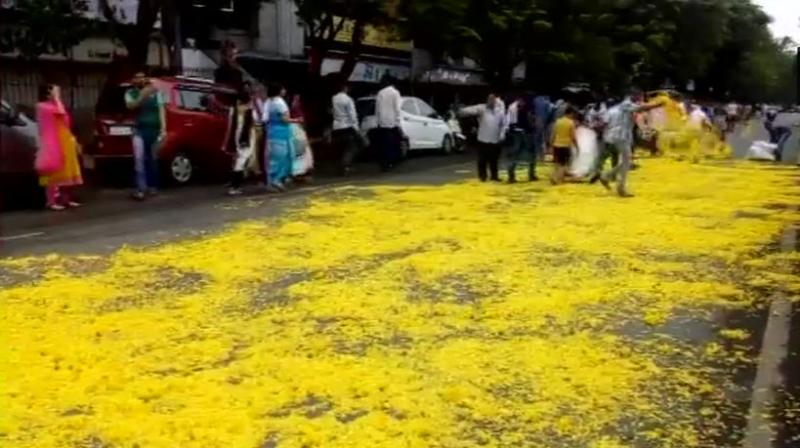 The roads towards his home were covered with yellow petals, representing the colour of hope and longing. (Photo: ANI | Twitter)

Mumbai: Mortal remains of Major Kaustubh P. Rane were received by grieving family members and thousands of people on Thursday. Rane was one of the four Army personnel killed in a gun battle with terrorists in Jammu and Kashmir’s Bandipura district on Tuesday.

According to a report, Rane’s body reached home in Mira Road on early Thursday. On late Wednesday, the coffin draped in national flag arrived in Mumbai where it was received by family members, Army, and civilian officials.

On Thursday morning, coffin decked with flowers was brought to his home in a military truck for last rites which will be performed with military honours.

People lined on both sides of the road, from building terraces showered flowers on the coffin and raised slogans of “Major Kaustubh Rane, Amar Rahe” and “Bharat Mata ki Jai”. The roads towards his home were covered with yellow petals, representing the colour of hope and longing. Rane’s family lived in Sheetal Nagar for over 25 years.

Major Rane is survived by his parents, sister, wife and a two-and-half-year-old son.

Rane fulfilled his childhood dream of joining armed forces by completing his training from Pune and was commissioned as an officer from Officers Training Academy, Chennai in 2011. Rane belonged to Army’s 36 Rashtriya Rifles. He was decorated with the Sena Gallantry Medal by President Ram Nath Kovind on 69th Republic Day in 2018.