Union home minister Amit Shah spoke to Fadnavis and assured him of all help to deal with the flood situation in the state. 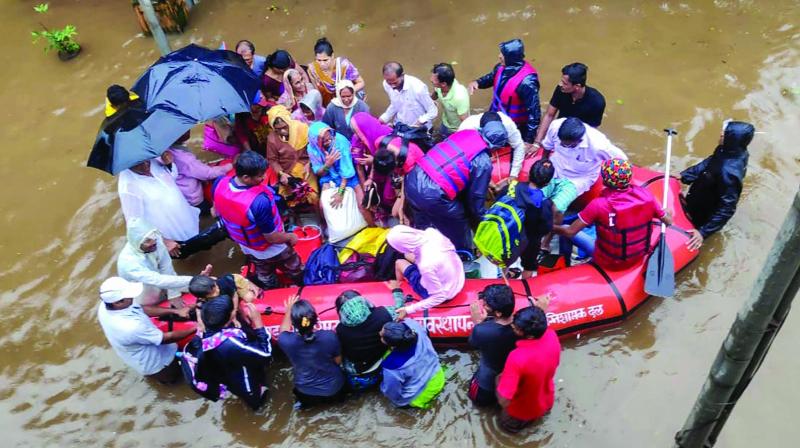 New Delhi: The flood situation remained grim in Maharashtra, Kerala and Tamil Nadu as torrential rains, gusty winds and landslips left a trail of destruction, with reports of 15 deaths on Thursday.

According to the India meteorological department, heavy to very heavy rains are likely in Madhya Pradesh, Chhattisgarh, Goa, Maharashtra, Gujarat, Karnataka and Kerala over the next two days.

Meanwhile, Delhi on Thursday witnessed a hot and humid day, with the mercury settling at 37.9 degrees Celsius. Humidity levels oscillated between 56 per cent and 88 per cent. No rainfall was recorded in the national capital.

Nine people drowned after a rescue boat capsized in flood-ravaged Sangli district of Maharashtra on Thursday.

Four deaths have been reported in Kolhapur in rain-related incidents so far, the chief minister said.

The Mumbai-Bengaluru National Highway, which passes through Kolhapur, is closed due to inclement weather.

Union home minister Amit Shah spoke to Fadnavis and assured him of all help to deal with the flood situation in the state.

This will help to bring down the water level in the flood-affected areas in Western Maharashtra, he said.

A year after the devastating deluge, northern Kerala is flooded again as heavy rains and widespread landslides claimed four lives on Thursday, taking the death toll to 32 since the monsoon began on June 6.

As “red alert” has been sounded in four districts and torrential rains submerged low-lying areas leaving people stranded in houses and isolated places, the Kerala government sought the help of Army and the National Disaster Response Force (NDRF) for rescue mission.

Water level is rising in most of the rivers and dams across the state with Kannur, Wayanad, Idukki, Malappuram, Kozhikode and Kasaragod districts facing a flood-like situation.