Schools and colleges are shut in in Kerala and Karnataka; Navy is keeping an eye on situation. 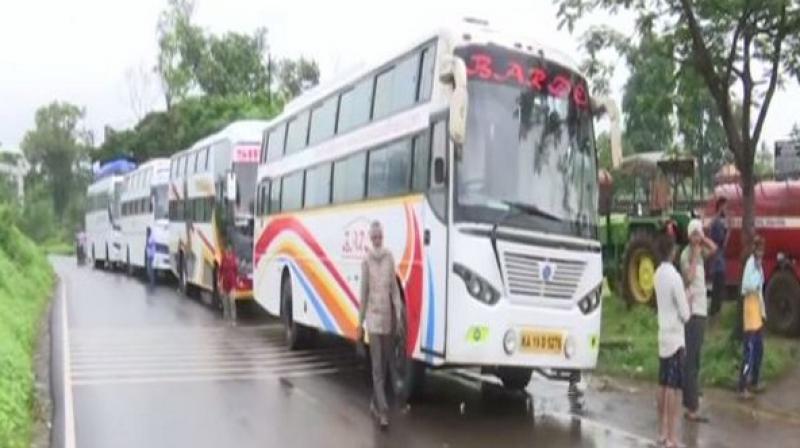 With large parts of Maharashtra, Karnataka and Kerala reeling under extensive flooding due to incessant rains, the Western Naval Command of the Indian Navy has mobilised considerable resources to provide assistance to state and district administrations of affected areas. (Photo: Twitter/ ANI)

Mumbai: Incessant rains have caused extensive flooding in large parts of Maharashtra, Karnataka and Kerala over the last few days. Over 22 lives have been lost in the floods.

The Western Naval Command of the Indian Navy has mobilised considerable resources to provide assistance to state and district administrations of affected areas.

Red alert had been issued on Thursday by the Kerala government in four districts: Wayanad, Idukki, Malappuram and Kozhikode.

Flight operations at Cochin International Airport in Kerala have been stopped till Sunday 3 pm due to heavy rain, airport officials said on Friday. The operations were suspended as there was a rise in water levels in Periyar river and a canal adjacent to the airport, reported news agency PTI.

On Friday, the Kerala Government declared holiday for the day across the state. Schools and colleges were shut in all 14 districts of the southern state on Friday, except state capital Thiruvananthapuram and Kollam.

As the death toll rises up to 22, Kerala Chief Minister Pinarayi Vijayan said, "315 relief camps have been set up and 22,000 people are located there. Most people in these camps are from Wayanad." However, the CM also said that intensity of rainfall is likely to subside tomorrow but another spell of extremely heavy rainfall expected from Aug 15.

Vijayan conducted a review meeting to discuss the disaster management measure being taken during Kerala floods.

A total of six bodies were recovered and 54 people have been rescued by National Disaster Response Force (NDRF) in a landslide that took place on Thursday in Puthumala near Meppadi in Wayanad.  Around 150 were feared trapped initially, and 60 people had been rescued.

Streets in Areekode town of Kozhikode district were flooded due to heavy rainfall in the region.

Karnataka had been experiencing a similar situation with 11 deaths so far. Union Minister Pralhad Joshi visited flood-hit Hubli. He said, "Ten NDRF teams have already been sent here. State government has requested for five more NDRF teams. As soon as I came to know all these things are needed, I spoke to Union Home Minister and apprised him of the situation."

Karnataka CM B S Yediyurappa conducted an aerial survey of Ghataprabha and Malaprabha river basin. Yediyurappa visited relief camps for those affected by torrential rainfall and floods in the state in the city of Mudhol. Indian Air Force (IAF) teams carried out flood relief operations in Karnataka's Belagavi.

A total of 25 civilians have been rescued by winching from Roggi, Halolli, Udhagatti and Girdal. Around 475 food packets along with drinking water dropped in affected areas. Six Air India Express flights from Manguluru have been rescheduled due to operational reasons in Karnataka.

Rains have caused flooding in Western Maharashtra where more than 2.85 lacs people have been rescued. Places like Kolhapur, Sangli, Pune and Thane are reeling under severe floods.

Eight buses and as many as 500 passengers remain stranded near the hem of the Kolhapur city, as several parts of Maharashtra witnessed heavy downpour giving rise to flood-like situation in the state.

Fifteen people were rescued from Gudra nullah at hairamgarh block in Chhattisgarh's Bijapur district on Friday, where they were stuck after it got flooded due to rainfall. They were returning from Barsur to Mangnar village in Dantewada when they got stuck.

In Chhattisgarh, 15 people were rescued from Gudra nullah at Bhairamgarh block in Bijapur district yesterday, where they were stuck after it got flooded due to rainfall. They were returning from Barsur to Mangnar village in Dantewada when they got stuck.

One woman and a child died in a cloudburst which has occurred in Padmalla and Faldiya Gaon village of Dewal block in Uttarakhand's Chamoli district. About 10 houses of the villages have been damaged in the incident. Rescue team and district administration are present at the spot.

Acknowledging the alarming situation, a high-level meeting is underway at Ministry of Home Affairs over situation of flood across country, especially Kerala, Karnataka, Gujarat and Maharashtra.