BJP hopes to keep Vajpayee’s memories alive among his voters 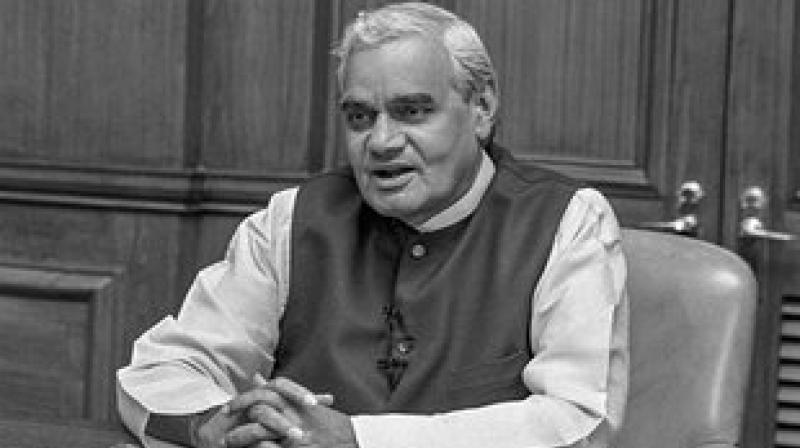 Lucknow: The ‘Ganeshotsav’ in Lucknow, beginning next week, will have political hues. It will be marked by a tribute to former Prime Minister Atal Bihari Vajpayee and will also focus on the various welfare schemes initiated by the Narendra Modi and Yogi Adityanath government.

The BJP hopes that by doing this, it can keep alive Mr Vajpayee’s memories among his voters. Atul Awasthi, convener of the Raja Ganesh Puja Samiti, said, “Mr Vajpayee had a long association with Lucknow so we have decided to have his photographs on display and his poems inscribed on the walls. We have also shortlisted local people who will relate anecdotes related to Mr Vajpayee to children every day in the evening. Local artistes will also sing his poems.”

This will be the first time that a politician will figure prominently in the Ganeshotsav in Lucknow. Some Ganesh pandals have also decided to promote the schemes of the Modi and Yogi government through the festival.

“In Ganeshganj, the Ganpati pandal will focus on the ‘Swachh Bharat’ campaign and in Aliganj, we are focusing on the ban on plastic by the Yogi government. In other pandals, we will be displaying posters related to ‘Beti Bachao, Beti Padhao’,” said Ravi Sharma.one of the organisers. Incidentally, a large number of Ganesh idols this year have been painted saffron instead of the usual pink. Normally, it is the Hanuman idols that are painted saffron. “There is no politics in this it is just that saffron is the colour of the season and radiates positivity,” said Mr Sharma.

Meanwhile, sources said that BJP leaders had requested various Ganesh pandal organisers to include a political message in the event.

“We have requested some pandal organisers to display photographs of Mr Vajpayee and popularise schemes related to our government. Ganeshotsav is now one of the biggest festivals in Lucknow and people from all walks of life visit the pandals and it is the easiest way to get our message across,” said a party functionary who did not wish to be named.

Meanwhile, the BJP will adopt a similar strategy during Navratri next month when Durga puja pandals are set up in the state capital.