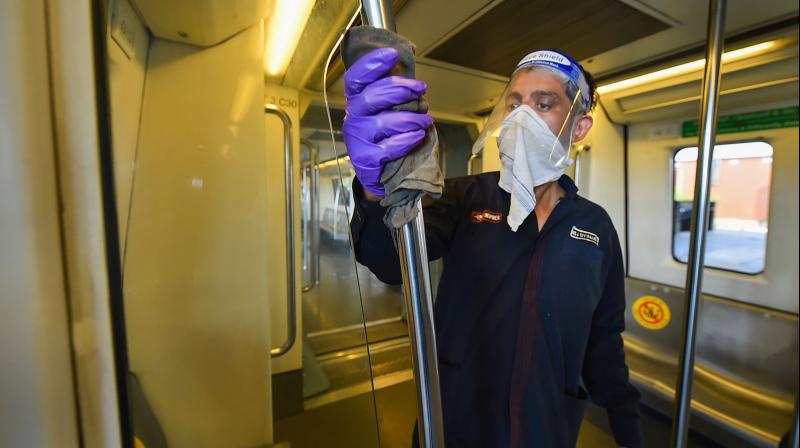 A Delhi Metro employee cleans a metro coach ahead of its trial-run on the Blue Line, following of its resumption after being closed for over five months due to coronavirus pandemic, at Yamuna Bank station in New Delhi. — PTI photo

Without losing much time on the vaccine front, the Indian government is now working towards initiating Phase 3 human trials of the Russian novel coronavirus vaccine – Sputnik V – on the Indian population. NITI Aayog member (health) VK Paul said that this decision was taken following the discussions with the Russian government which had approached India for manufacturing of Sputnik V in India and its possible use for Indians. The trials or the bridging studies for the Russian vaccine will begin shortly after the regulatory process is over.

In addition to this India is all set to start Phase 3 trials of the Oxford vaccine candidate next week at 17 locations. Besides, two indigenous vaccine candidates – one by Biotech and another by Zydus Cadilla – too are progressing well with Phase 3 trials set to go. However, given its huge population, the government is happy to collaborate with partner nations to get the benefit of vaccines for its population as soon as possible.

“Russia had offered us production of the vaccines by Indian companies and Phase 3 trials in India. The government of India attaches great importance to this offer of partnership from a very special friend of this nation. It is a win-win situation for us. On both fronts there has been significant progress. Some companies are in touch for manufacturing. On the regulatory aspect, the Indian scientists have looked at it and have paved the way for Phase 3 and bridging studies which will be facilitated in the spirit of partnership, science and humanity,” Paul said.

The development comes at a time when India is recording very high numbers of cases on a daily basis. In the last 24 hours, close to 76,000 fresh cases of COVID-19 were detected from various parts of the country taking India’s total tally to 42.80 lakh, as per union health ministry data of early Tuesday morning. India also registered record 1, 133 deaths in a single day taking its overall fatalities due to the deadly virus to 72, 775.

While Paul said cases are very high on daily cases and not stabilizing at present, he attributed these rising numbers to higher testing India is conducting among its population. He added that the virus is spreading faster because people are avoiding testing despite having symptoms and they are spreading infection since they are neither isolated nor treated. He also blamed people for being laxed and not taking enough precautions while going in public.

“Economic activities and unlocking processes have helped the virus grow more…But let us not forget that the recovery rate in India is very good and the case fatality rate is very low (1.70%)…When we see closely we find signs of stabilising,” he said.

The virus has spread as remote as the Andaman Nicobar Islands and infected some of the protected primitive tribe members known as Particularly Vulnerable Tribal Groups. Union health secretary Rajesh Bhushan said that out of the vulnerable six tribes on the islands, the near extinct Jarawa and Ongese tribes, that have 200 and less than 100 population, respectively, are untouched with the virus as all have tested negative while there have been no reports of symptoms or deaths from COVID-19 from the Sentanalese and Shom Pen tribes living on remote islands where authorities have not gone in.

However, there are 15 active cases among Nicobarese and 6 persons were infected from another protected group of Andaman who had their family members working in Port Blair. The UT has so far reported a total of 3,359 COVID-19 cases out of which 312 are active, 2,997 have recovered and 50 people have died. Twenty-seven fresh cases were detected in Andaman and Nicobar Islands on Tuesday.