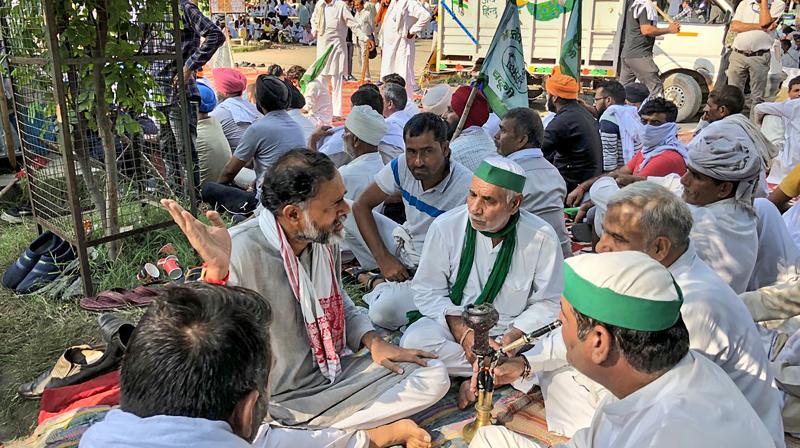 Activist Yogendra Yadav with farmers during their sit-in protest continuing from yesterday after their Kisan Mahapanchayat, outside the Mini Secretariat in Karnal, Wednesday, Sept. 8, 2021. (PTI)

Chandigarh: With protesting farmers continuing their sit-in "indefinitely" at the district headquarters in Karnal, the Haryana government has extended the suspension of mobile Internet services in the district till Thursday midnight, an order issued by state Home Department said.

"Mobile Internet services in Karnal district will remain suspended from 07:00 hours till 23:59 hours of September 9," said the order issued on Thursday.

Another round of talks between district officials and farmers protesting over a police lathicharge in Karnal last month had failed on Wednesday after which the protesters said they will continue their sit-in "indefinitely" at the district headquarters.

Earlier, mobile Internet services in Karnal were suspended from 12:30 pm on September 6 till 11:59 pm on September 7 and the suspension was extended till Wednesday midnight as the situation was considered "still volatile".

Now, the fresh order mentions that the situation has been reviewed "and observed to be still tense..."

"Whereas, it has been brought to my notice vide..dated September 9 by ADGP (CID), Haryana that the situation has been reviewed and observed to be still tense and would trigger any time which may adversely affect public safety and law and order situation in district Karnal...," said the order referring to the protesters' call to continue the sit-in "indefinitely".

It said that the suspension of mobile Internet services was ordered to stop the spread of misinformation and rumours through social media platforms such as WhatsApp, Facebook and Twitter on mobile phones and SMS. It said this could facilitate mobilisation of mobs who can cause serious loss of life and damage to public and private properties by indulging in arson, vandalism or other violent activities.

All telecom service providers of Haryana are, hereby, directed to ensure compliance of the order, it added.

Meanwhile, into the third day of the dharna, protesters are staying put at the gate of the mini-secretariat complex in Karnal, though farm union leaders have said officials and the public won't be stopped from entering it.

Their demands centre around the suspension of IAS officer Ayush Sinha, who was caught on tape allegedly telling policemen to "break heads" of farmers if they cross the line during their August 28 protest.

About 10 farmers were hurt that day when police used force to stop them from marching to the venue of a BJP event in Karnal.

The sit-in outside the Karnal mini-secretariat, following a mahapanchayat in the same city, began Tuesday evening after talks between district officials and the farm leaders "failed".

For over nine months now, farmers have been sitting on dharnas at Delhi's borders demanding that the three agri-marketing laws enacted at the Centre should be withdrawn. The Union leaders claim the laws will lead to the dilution of the minimum support price (MSP) at which farmers sell their crops to government agencies.