Prohibitory orders in Mumbai during Ganesh festival, no processions allowed

Devotees would not be allowed to visit Ganesh pandals either, an official statement added 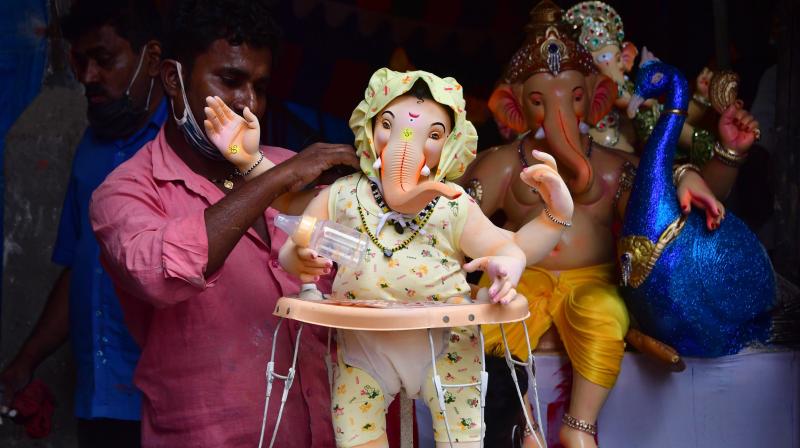 An artist gives final touches to an idol of Lord Ganesh ahead of the Ganesh Chaturthi festival, at a workshop in Mumbai. (Photo: PTI)

Mumbai: Citing the COVID-19 situation, police on Thursday imposed orders under CrPC section 144 in Mumbai prohibiting assembly of five or more persons during the Ganesh festival between September 10 to 19.

No processions of any kind would be allowed in the city during this period and devotees would not be allowed to visit Ganesh pandals either, an official statement added.

Section 144 of the Code of Criminal Procedure empowers the authorities to issue prohibitory orders for preventive purposes.

The Maharashtra home department had issued a circular the day before banning visits to pandals so as to prevent the spread of the viral infection.

The order issued by Deputy Commissioner of Police S Chaitanya referred to the directives of the home department as well as the Brihanmumbai Municipal Corporation (BMC).

People can have `darshan' of Ganesh idols installed in pandals through the online mode or through other electronic media (such as TV), the police release said.

Any person violating the orders would face action under IPC section 188 (disobeying order lawfully promulgated by public servant) and other relevant laws, it said.