BRICS has committed to combating terrorism, including the cross-border movement of terrorists, and terrorism financing networks 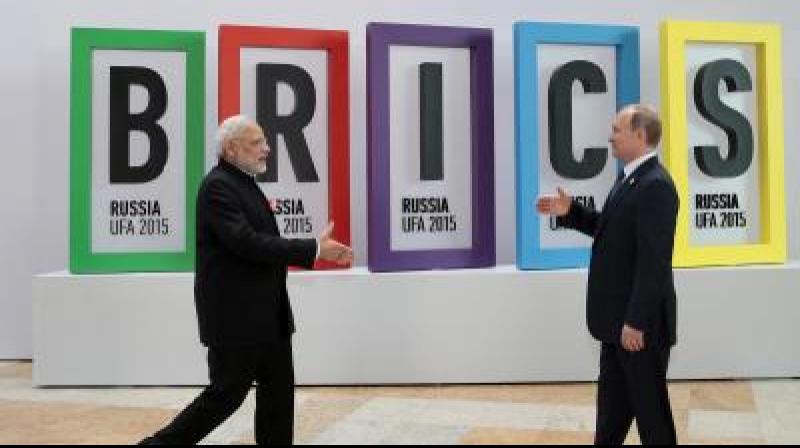 This is the second time that PM Modi will be chairing the BRICS Summit, the first being the Goa Summit in 2016. (PTI)

New Delhi: Prime Minister Narendra Modi will chair the 13th BRICS (Brazil-Russia-India-China-South Africa) Summit on Thursday in a Virtual format that will be attended by Russian President Vladimir Putin, Chinese President Xi Jinping, Brazilian President Jair Bolsanaro and South African President Cyril Ramaphosa, with all five leaders set to deliberate on the situation in Afghanistan and likely to underscore the priority of fighting terrorism, including preventing attempts by terror organisations to use Afghanistan as a sanctuary to carry out attacks against other countries. The BRICS leaders are also expected to to emphasise the need to address the humanitarian situation in Afghanistan and uphold human rights, including those of women, children and minorities. This will be a major deliberation by world leaders following the capture of power by the Pakistan-based Taliban in the strife-torn nation last month.

The BRICS Counter Terrorism Action Plan which was recently “adopted and recommended  for consideration by the BRICS Summit” by the National Security Advisors (NSAs) of the five member-nations may also be presented before the leaders at the Summit, with India’s National Security Advisor (NSA) Ajit Doval scheduled to present a report before the five leaders that may mention the role of Pakistan-based terrorist organisations like the LeT and JeM. The Action Plan aims to “further strengthen existing mechanisms of cooperation in areas such as financing and combating terrorism, misuse of the internet by terrorists, curbing the travel of terrorists, border controls, protection of soft targets, information sharing, capacity building, and regional and international cooperation”. BRICS has committed to combating terrorism, including the cross-border movement of terrorists, and terrorism financing networks and safe havens.

In addition to these areas, the leaders will also exchange views on the impact of the COVID-19 pandemic and other current global and regional issues besides Afghanistan.

India had outlined four priority areas for its Chairship - the Reform of the Multilateral System, Counter Terrorism, Using Digital and Technological Tools for achieving Sustainable Development Goals (SDGs) and Enhancing People to People exchanges. This is the second time that PM Modi will be chairing the BRICS Summit, the first being the Goa Summit in 2016. The Indian Chairship of BRICS this year coincides with the fifteenth anniversary of BRICS, as reflected in the theme for the Summit.

The adoption of the Joint Statement on ‘Strengthening and Reforming of the Multilateral System’ earlier by BRICS Foreign Ministers was the first of its kind to be adopted by BRICS countries. The Statement acknowledged that the current multilateral system, including the UNSC (Security Council) , is in dire need of reform and outlines a set of principles which should guide the process of reform.

Trade is another important issue likely to figure. Under India’s Chairship, BRICS Trade Ministers had also adopted the BRICS Implementation Roadmap on Trade and Investment comprising practical measures to boost intra-BRICS trade. Trade Ministers of the five nations had also agreed on a framework for cooperation in trade in professional services, consumer protection in e-commerce and cooperation for protection of genetic resources, traditional knowledge and traditional cultural expression. The finalisation of the BRICS Mutual Customs Assistance Agreement is also seen as a step in this direction.