Heavy rains have lashed Marathwada region over the last few days, with 31 people dying in rain-related accidents in a week 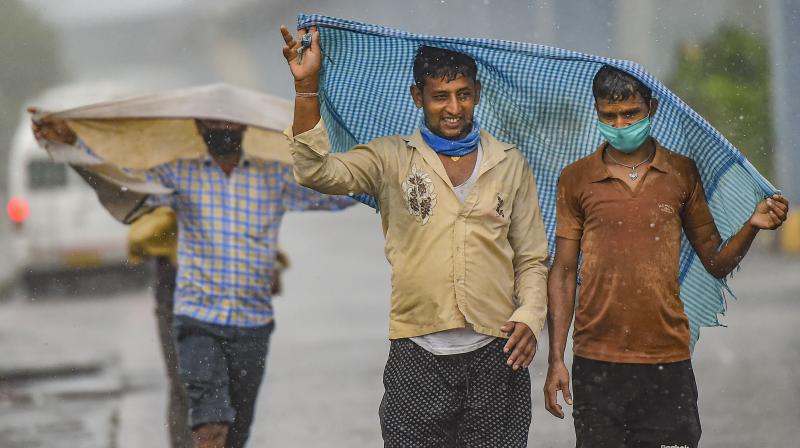 People use a piece of cloth to take cover from the rain, in Mumbai. (Photo: PTI)

Nanded: The water level in Godavari river has reached the "alert" mark amid heavy rainfall in the Marathwada region, and the phenomenon has occurred after nearly 15 years, PWD Minister Ashok Chavan said on Thursday.

Chavan, who is also the guardian minister of the district, took stock of the situation arising out of heavy rainfall in the region.

Heavy rains have lashed Marathwada region over the last few days, with 31 people dying in rain-related accidents in a week, out of which seven deaths occurred in Nanded.

Speaking to reporters, Chavan said, "Water has reached the 'alert' mark in Godavari river. This phenomenon is being seen after 15 years. Over the years, several buildings have come up along the river, and I have also seen that some structures have been built in nullahs in Nanded city."

The minister held meetings with officials from the local administration and visited Godavari river.

People whose homes were flooded due to heavy rains will get aid, Chavan said, adding that he also took stock of the losses in agriculture and infrastructure sectors in the district.

According to officials, Nanded has received 962.7 mm rain so far this monsoon, which is 118 per cent of its average annual rainfall.