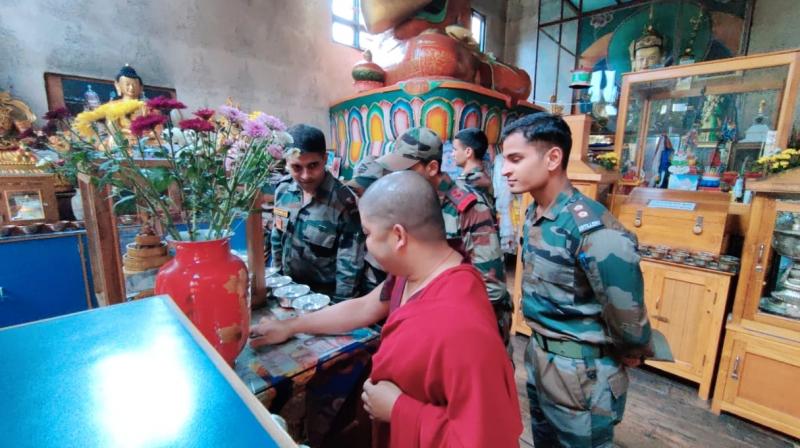 : Indian Army personnel visit a monastery during the course. (Photo by arrangement)

Kolkata: The fourth cadre on Tibetology, conducted by the Eastern Command of the Indian Army to train its soldiers on the strategic mountainous region in dealing with China at the Line of Actual Control, has successfully concluded at Gangtok in Sikkim.

The module was organised by the Black Cat Division of Sukna-headquartered Trishakti Corps. The 42 day-long cadre was attended by officers of various army formations in Sikkim and West Bengal. It covered lectures on subjects like Tibetan language, Tibetan Buddhism and Literature which were delivered by professors and research coordinators from Sikkim University and Namgyal Institute of Tibetology, Gangtok.

The Trishakti Corps said on Friday, "Through the duration of the course, guest lectures by prominent speakers including Passang Tsering and Claude Arpi, also a famous author and a domain specialist in Tibetan Geopolitics, was undertaken. The participants were also given an exposure to religion and architecture of Tibet by organizing field visits to Monasteries and a visit to the border areas. In a bid to enhance understanding of its neighborhood, the officers undertook research on subjects like ‘Tibetan Buddhism’ and ‘People of Tibet.'"

The Eastern Command has initiated several measures to train its troops on understanding Tibet, as part of which, Tibetology cadres are being conducted in Sikkim and Arunachal Pradesh.