The revamped stretch is part of the Modi govt's Central Vista redevelopment project, which also has a new triangular Parliament building 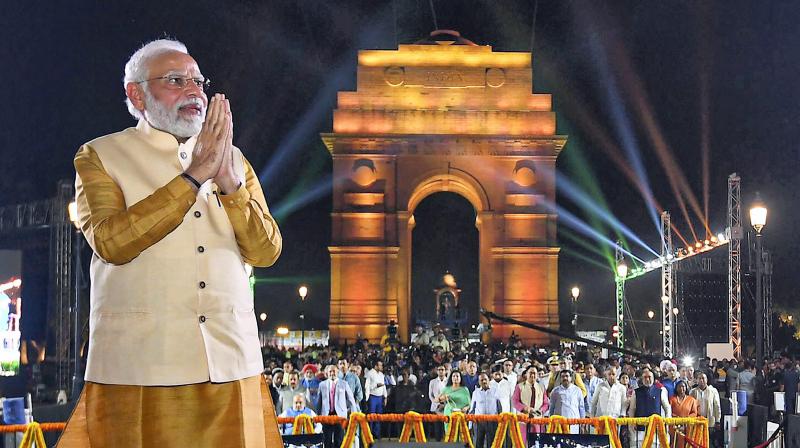 NEW DELHI: After inaugurating the "Kartavya Path", Prime Minister Narendra Modi on Thursday said the Rajpath that was earlier known as Kingsway, a symbol of slavery, has now been consigned to history. He also unveiled a statue of Netaji Subhas Chandra Bose at India Gate

Speaking after inaugurating the revamped stretch from Rashtrapati Bhavan to India Gate, redeveloped at an estimated cost of around Rs.477 crores and unveiling a 28-foot statue of Netaji, the PM asserted that a new history has taken birth in Kartavya Path and that this, along with Netaji's statue, will now guide and inspire the country.

Mr Modi said, "It symbolises a shift from the erstwhile Rajpath being an icon of power to Kartavya Path being an example of public ownership and empowerment and in the time of ‘Azadi ka Amrit Mahotsav', the nation felt a new inspiration and energy today."

"Today, we are filling the picture of tomorrow with new colours, leaving behind the past. Today this new aura is visible everywhere; it is the aura of confidence of New India," he said.

The PM said, "Kingsway or Rajpath, the symbol of slavery, has been consigned to history from today and has been erased forever. Today, a new history has been created in the form of the Kartavya Path. I congratulate all the countrymen on their freedom from yet another identity of slavery, in this amrit kaal of Independence."

He also pointed out the Indian Navy's new ensign that sheds its colonial legacy and is inspired by Chhatrapati Shivaji.

"Similarly, the National War Memorial also represents the glory of the country," he said.

Mr Modi also thanked workers involved in the development of Kartavya Path and said that they not only built it but also showed the other ways of "kartavya" (duty). They will be his guests for the Republic Day parade on January 26, he said.

The Prime Minister called upon every citizen of the country and sent out an open invitation to come and see this newly constructed Kartavya Path in all its glory. "In its development, you will see the India of the future. The energy here will give you a new vision for our vast nation, a new belief," he said.

The revamped stretch is part of the Modi government's ambitious Central Vista redevelopment project, which also has a new triangular Parliament building, a common Central Secretariat, a new Prime Minister's residence and office and a new vice-president's enclave.

The revamped stretch from Rashtrapati Bhavan to India Gate is estimated to have cost around Rs 477 crore.