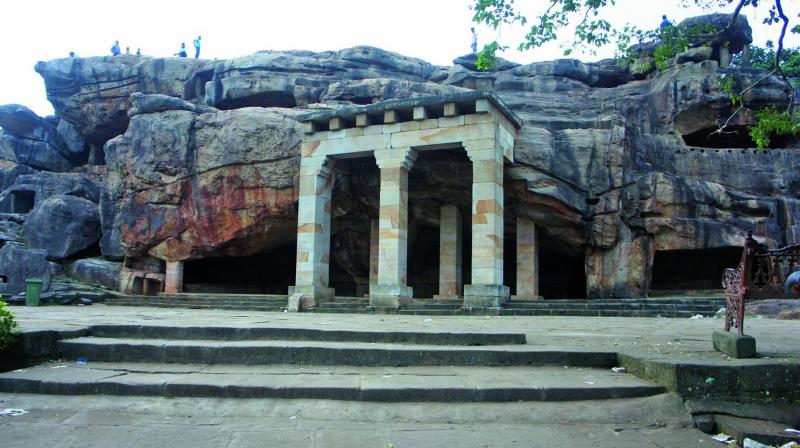 Bhubaneswar: The 33 rock-cut Jain caves on the twin hills of Udaygiri and Khandagiri on the outskirts of Odisha capital Bhubaneswar have of late been drawing huge crowd of researchers for studying more about the life and preaching of 24 Jain Tirthankars as well as socio-economic conditions of Kalinga, the ancient name of Odisha.

Excavated by Emperor Kharavela of Chedi dynasty during the 1st century BC and subsequent rulers, the caves - 15 on Khandagiri and 18 on Udayagiri hills - have inscriptions and ornate carvings of Hindu gods, animals and women on the walls.

The inscriptions and carvings depict heroic deeds, administration and other activities of Emperor Kharavela.

The researchers are focusing on multi-aspects, including the socio-economic conditions and religious tolerance prevailing in the 2nd and 1st century BC.

According to Jayanti Rath, superintendent of Odisha State Museum, research scholars of department of Ancient Indian History of Utkal University and Utkal University of Culture, apart from studying the architectural magnificence of the Jainism period - are currently focusing on digging out information about the social conditions in Kalinga.

“Enough light has been thrown on the architectural richness of the rock-cut caves at Khandagiri and Udayagiri. We need to tell people more on the socio-economic conditions of the society during the period when the Kalinga rulers, including Emperor Kharavela, patronised the religion,” said Ms Rath.

Dr Gourang Charan Rout, a research scholar on Jainism, said although the Hathigumpha (Elephant Cave) inscriptions and the ornate carvings on the walls of other caves throw some light on the richness of the King, the art and culture, very little is known about common people and their socio-economic
activities.

“The paintings and 17 lines of inscription on Brahmi scripts and Magadhi Praktriti language in Hathigumpha record the career and achievements of Emperor Kharavela in a chronological order from his early childhood to 13th year of rule. The inscriptions also record the expeditions of Kharavela and his victory over Satavahan King Satakarni;  Magadha and retrieval of Kalinga Jina which was taken by a Nanda king of Magadha long before. But nothing in detail is mentioned about the life and socio-economic background of soldiers, farmers and people of other trades of that period,” said Dr Rout.

He adds that Rani Gumpha or Queen’s Cave which is another architectural marvel of Kharavela, throws a little light on social life of the people.

“The doorways and cells of Rani Gumpha are notably crowned by bulls and winged lions. There are also depictions of infuriated elephants attacking a man and 10 women, abduction of a woman, royal hunting scene, dance performance before a royal couple. Besides, it also depicts scenes of military marches of the king and his victorious homecoming; a woman dancing under pillared pavilion; a pious couple standing reverently with folded hands and elephants. All these mostly point to the palace activities,” said Dr Rout.

Emperor Kharavela, who made Jainism the state religion of Kalinga (now Odisha), was very tolerant towards Buddhism, Saivism and Saktism and Vaishnavism which flourished in the region during the same period.

According to historian Professor Indrajeet Mohanty, the Jain concepts of Ahimsa (non-violence), discipline and austeritiy must have had a great effect on the tribal and rustic society of Kalinga.

People must have become more tolerant, pacific and followed a well-planned life and ready to work hard for any good cause.  Moreover the great stress on Ahimsa or non-violence laid by the Jains must have impacted the economy.

“Ahimsa was accepted by and patronised by the mercantile class.  This class must have grown in strength due to royal patronage and religious solicitude of the Jains, resulting in the economic prosperity of Odisha,” Mr Mohanty said, adding, further studies are required to unravel the socio-economic life of the common people who extended overwhelming supports to the kings during the time of war as well as peace.