India   All India  09 Oct 2017  Video shows mob thrashing Nigerian in Delhi: 1 held; hunt on for others
India, All India

Video shows mob thrashing Nigerian in Delhi: 1 held; hunt on for others

A spokesperson of the Delhi Police has said a legal action will be taken in this regard. 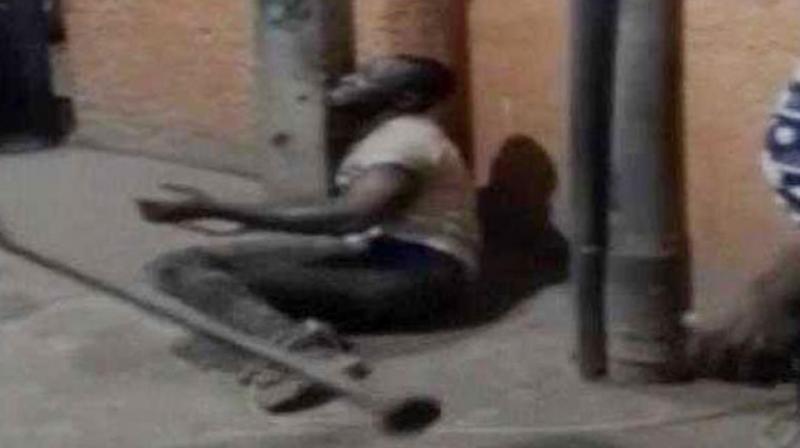 The Nigerian national was beaten up by the mob on September 24 in Malviya Nagar in south Delhi. (Screengrab)

New Delhi: The Delhi Police has arrested one person and is looking for others, who were caught on camera thrashing a Nigerian man, tied to a lamp post, with sticks for allegedly attempting burglary.

The arrest was made after a video of the incident, which took place on September 24 in Malviya Nagar in south Delhi, surfaced online, on Monday.

Ishwar Singh, the Deputy Commissioner of Police (DCP), South, said that the Nigerian national was arrested on September 24 for attempted burglary and a case was registered against him. But he did not inform the police about the assault, he added.

“When video surfaced, we got to know what happened. He was beaten up because of theft suspicion. There is no racial basis,” Singh said.

“Even if the Nigerian national was stealing, beating him is not justified. We have identified one man from video and arrested him. We are looking for others,” the DCP added.

Earlier on Monday, Delhi Police took cognisance of the video, which was published by media houses. A spokesperson of the Delhi Police said a legal action will be taken in this regard.

#WATCH Nigerian national tied to a pole and beaten up by locals for alleged theft in Delhi's Malviya Nagar (24.09.2017) pic.twitter.com/3zWgbeqvN5

The video shows the mob hitting the Nigerian man with sticks even as he pleaded for mercy.