Congress president alleged that PM Modi benefited 15-20 industrialists of the country instead of farmers. 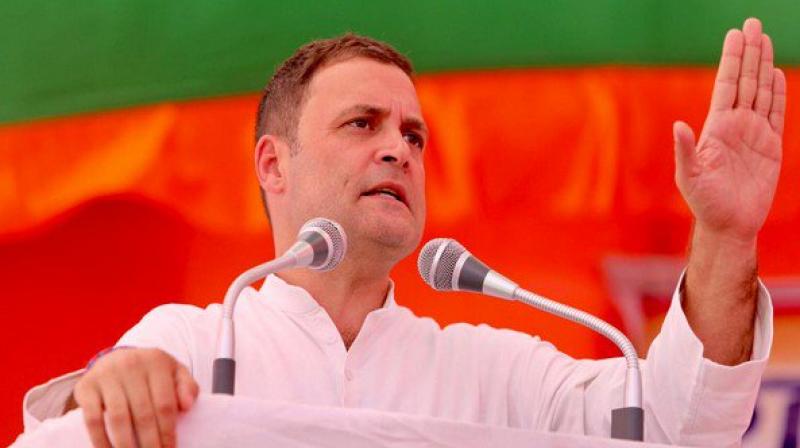 Dholpur (Rajasthan): Taking his attack against Prime Minister Narendra Modi to poll-bound Rajasthan, Congress president Rahul Gandhi on Tuesday said demonetisation and the Goods and Services Tax (GST), which he referred to as Gabbar Singh Tax, had destroyed India's economy.

Addressing a rally in Dholpur's Mania area, Gandhi said the Prime Minister had declared during elections that he wanted to be a 'chowkidar' but never clarified who he wanted to guard. The Congress president alleged that he benefited 15-20 industrialists of the country instead of farmers.

According to Gandhi, the former UPA government led by his party had waived farmers' loans worth Rs 70,000 crore. But bad debt worth Rs 3.5 lakh crore was written off by the present government and the Prime Minister did not help farmers with even a one rupee waiver, he alleged.

Gandhi, who is on a two-day visit to the state, named several industrialists, including Nirav Modi, Mehul Choksi, Lalit Modi and Anil Ambani, and said the PM benefited them but did not take care of farmers and youths.

Gandhi claimed the government had destroyed the country's economy with decisions like demonetisation and GST. PM Modi, he said, benefited his industrialist friend in Rafale deal and did not speak a single word when he raised the matter in Parliament. The Congress president said the Centre and state governments worked against people, small-scale business, farmers, women and youths.

The former UPA government introduced several schemes and programmes for the poor, including MGNREGA. Moreover, the former Ashok Gehlot government in Rajasthan had brought free medicines schemes but the BJP governments had weakened them and worked against the people, Gandhi said.

The Congress chief, who is holding a 150 km roadshow in eastern Rajasthan, will visit Bikaner on Wednesday.

Elections in Rajasthan will be held on December 7.