Mallikarjun Kharge called it a 'tamasha', saying that the Congress made no display when the Bofors guns were purchased. 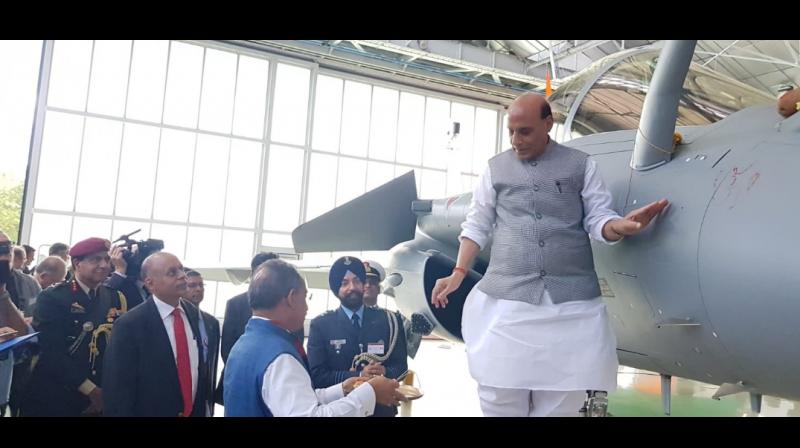 Union minister Amit Shah lashed out at the Congress, pointing out that Shastra puja is a long-held tradition in the country. (Photo: Twitter)

While the Congress has slammed it as "tamasha"(drama) and "superstition", Singh's cabinet colleague and BJP chief Amit Shah has lashed out, questioning the Congress's choice of issues to criticise the BJP. The BJP also said the Congress is used to worshipping Ottavio Quattrocchi, the alleged middleman in the Bofors deal. Congress Sanjay Nirupam joined the fray, calling his own party's critics "atheists", NDTV reported.

On Tuesday, after taking the formal handover of the first of the 36 Rafale jets in France, Rajnath Singh had performed a "Shastra puja" -- the traditional veneration of weapons on the occasion of Vijaya Dashami.

In front of the gathering, he wrote the Sanskrit word "Om" on the body of the aircraft, sprinkled it with flowers and offered up a coconut. Finally, he placed a lime in front of the wheels -- a practice meant to ward off evil -- before flying off on a sortie in the jet.

Senior Congress leader Mallikarjun Kharge called it a "tamasha" (drama), pointing out that the Congress made no such display when the Bofors guns were purchased.

"There is no need to do such ''tamasha''. When we bought weapons like the Bofors gun previously purchased, no one went and brought them while showing off," he was quoted as saying by news agency ANI.

He even took a dig at the defence minister's sortie in the fighter jet, saying, "These people go, show off, sit inside (the aircraft)".

Congress leader Udit Raj, a former minister of the BJP, also took a dig at Singh's action, questioning what the world would think of India after such a "superstitious" show.

In a Hindi post on Twitter, he said: The Rafale jet belongs to France. While being inducted into the Air Force, it was protected with nimbu-nariyal (lemon-coconut). What would the world be thinking? Due to this superstition, such fighter aircraft have to be bought from outside. The day superstition ends, we will build it ourselves."

The BJP, taking a dig at the Congress over the Bofors deal made by the government headed by former Prime Minister and Sonia Gandhi's husband Rajiv Gandhi, said they are used to worshipping Ottavio Quattrocchi, an Italian national, who was one of the alleged middlemen in the deal.

Union minister Amit Shah lashed out at the Congress, pointing out that Shastra puja is a long-held tradition in the country. "Is 'Shashtra Puja' not performed on Vijayadashami? I want to tell them (the Congress) -- 'Think about what should be opposed and what not'," he said.

His words found support in an unlikely quarter. "Shastra puja cannot be called a tamasha," senior Congress leader Sanjay Nirupam said. "There has been an old tradition of 'shastra puja' in our country. The problem is that Kharge Ji (Mallikarjun Kharge) is an atheist. In the Congress party, not everyone is an atheist," he added.