India   All India  09 Oct 2019  'First conserve, then consume': Mumbai man sets up novel way to save water
India, All India

'First conserve, then consume': Mumbai man sets up novel way to save water

He explained that the process can keep a check on the various problem that an urban and coastal city like Mumbai faces. 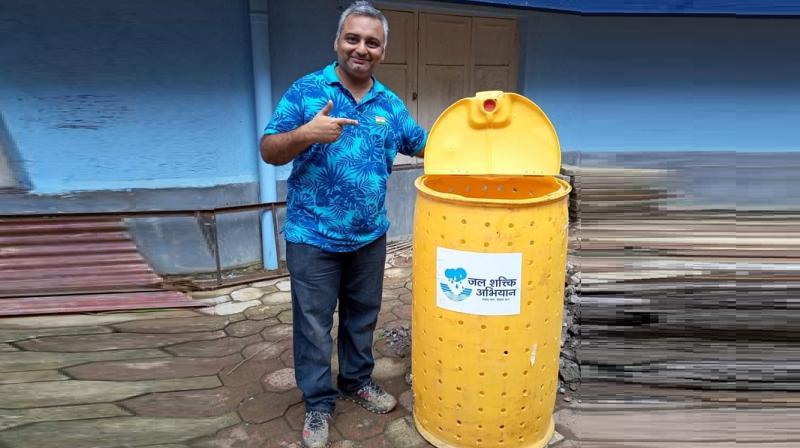 The 40-year-old Mumbai man gave up his career to educate people about setting up economical rainwater harvesting systems to recharge groundwater and save rainwater for reuse. (Photo: Subhajit Mukherjee)

Mumbai: ''We are at the beginning of a mass extinction''. This is the line from climate change activist Greta Thunberg's 'passionate' speech at UN, New York. Despite the controversy surrounding her intentions, every word that the 16-year-old activist said can not be defied.

India is one of the countries that is facing the wrath of nature at its peak. From extreme weather conditions to increasing pollution, we are at the center of an adverse environmental crisis. Despite being well-versed with the situation, 'sustainable development' has become a cliché and only a few are taking dedicated steps in the right direction.

Subhajit Mukherjee is one from the group of odds. The 40-year-old Mumbai man gave up his career to educate people about setting up economical rainwater harvesting systems to recharge groundwater and save rainwater for reuse. 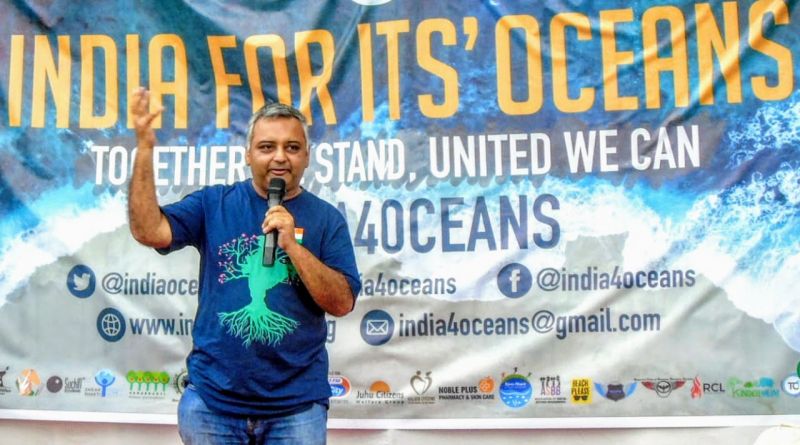 "It is very frustrating that we have to spend money for something we get for free from nature -- water,'' Mukherjee said. He explained that in earlier times people never used to pay for water and ponds and wells for the source of fresh water. ''But today, a guy living in 1 BHK flat is paying Rs 7000 as water tax, for 2 BHK it is 12-14k yearly and it is heftier for a bungalow resident,'' Mukherjee exclaimed.

The recent times are witnessing one of its major water crisis. While major cities like Delhi, Bengaluru and others are facing zero groundwater levels, Mumbai and Patna witnessed ceaseless pouring. The uneven weather pattern combined with the population explosion, failure of Individual and government's action plan has worsened the scenario.

Explaining the process, Mukherjee said the basic idea is simple. We just need to channel water that falls onto the terrace into a pit an underground to conserve and revive groundwater. 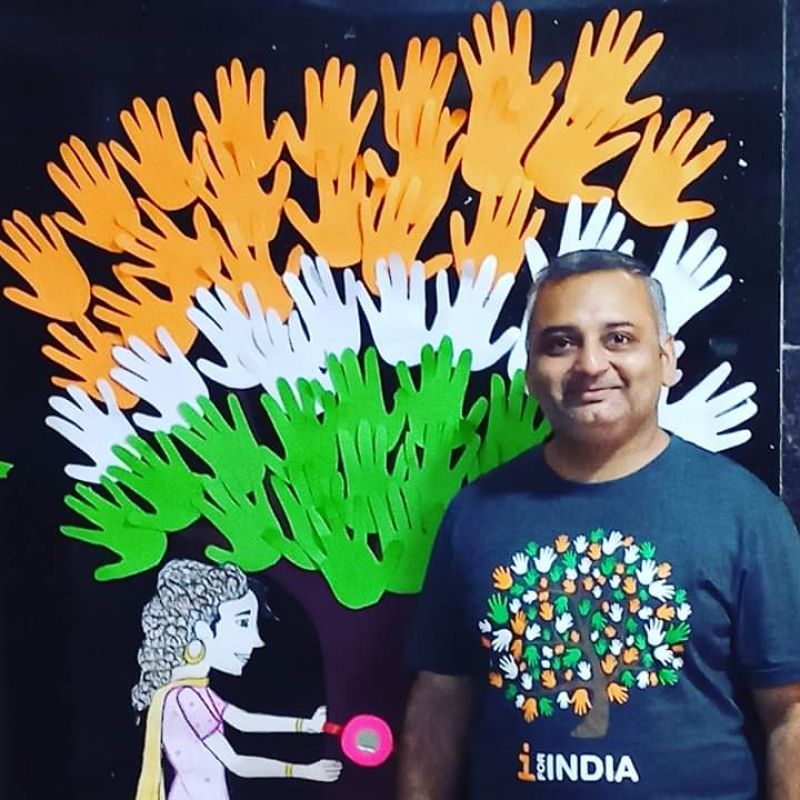 For the process, one needs to ''dig a pit of 10x10 feet and fill it with pebbles and stones. Through this, water will reach the land. There is an estimate that 6x6 feet pit helps to take 1,000 liters of water into the land," he said. At the center of the pit, a drum, which has holes around it and at the bottom, is placed. The drum is connected to the terrace using PVC pipes. As soon as the rainwater starts seeping into the ground, the groundwater table is recharged.

''Everything has been concretised these days, That's why the water is not able to reach the ground. We need to dig these pits around this area whenever monsoon arrives... and they are small, no one can fall in it. You can park car on it, walk and play around, no problem at all. You can always use that area,'' Mukherjee said.

''Most of the water will pass through the holes in the drum, into the soil. During heavy rainfall, a lot of water can be collected in the drum too. You can use it for non-drinking purposes like -- washing utensils, car, etc.'', Mukherjee suggested.

He explained that the process can keep a check on the various problem that an urban and coastal city like Mumbai faces. 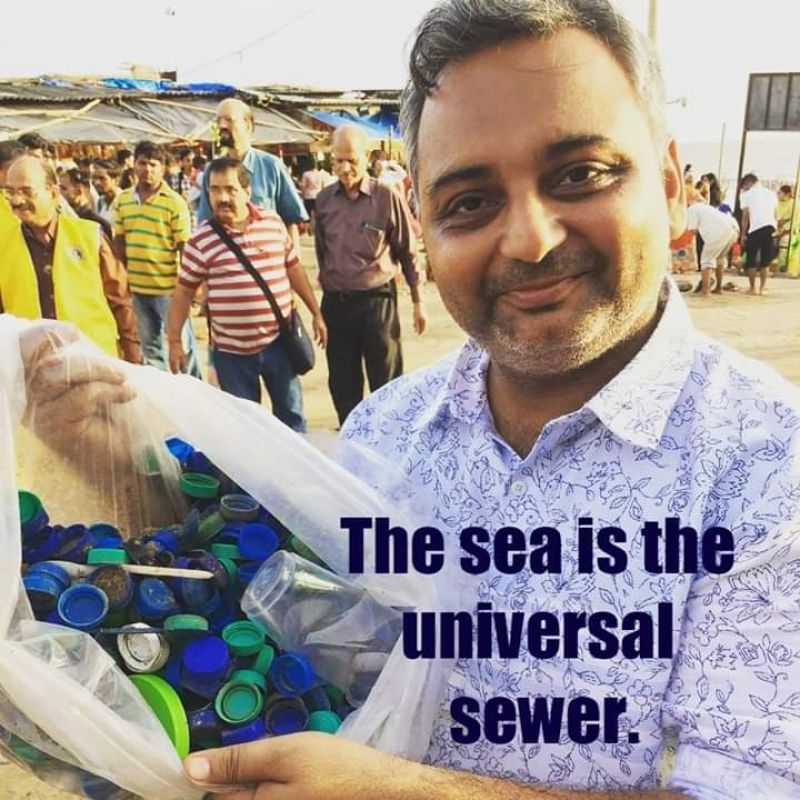 ''It can save the city from flooding. Our lands have lot of potential to soak water but because of concrete tiles, loads of water gets wasted,'' Mukherjee said.

He further said that the quality of the soil of coastal Mumbai is degrading day by day as it is becoming saline, making it less suitable for many trees, including fruit-bearing ones.

''In the coastal region, the land is very dry. Acting to its natural propensity, the dry soil starts to soak in salty water or ocean water, making the soil saline,'' Mukherjee said.

Explaining the downside of this saline land, Mukherjee said: ''The trees growing on this land don't have strong roots, they can't bear quality fruits or simply runs futile and often starts to shed leaves.''

Mukherjee said that it is very important to recharge groundwater as not all trees -- like coconut -- are meant to grow on salty land.

Awareness is the key:

Mukherjee believes that more we make people aware of this water-conserving technique, the higher are the chances of neutralising the environmental havoc created by humans.

In Mumbai itself, the 'blue drum' model has been replicated in more than 300 schools. ''In schools, it is easy to get spare drum and students enjoy this activity. So it saves money... These children go home and educate their parents about the process... Even the school gives a letter to parents and invites them to visit the school and see the 'blue drum structure' and how it works.

In 2010, he started a campaign 'Mission Green Mumbai' to increase the green cover across the city. 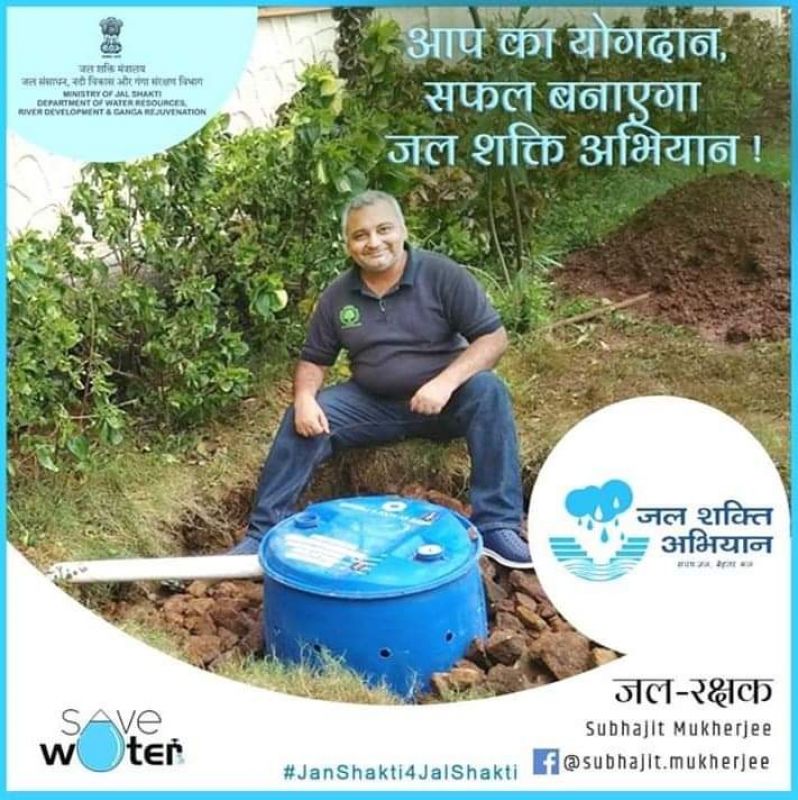 He extensively started to work for 'mother earth' and advocated that 'every individual should grow its oxygen (tree)'.

After the successful run of the campaign, Mission Green Pune, Delhi, Chennai, Hyderabad, Coimbatore, Kolkata and Pondicherry were started soon. In Pondicherry, with the help of Governor Kiran Bedi the campaign became a huge success.

Mukherjee also credits students of premier institute, IIT Bombay with whose recommendation and guidance he prepared this 'green model'.

''I collaborated with IIT Bombay on July 1, 2019. Then NITI Aayog came into the picture and fortunately, Jal Shakti Ministry was formed too around the same time. The ministry also liked this idea and they made me Jal Rakshak (water conservationist)... my job was to take this campaign to every school.

With the help of the BMC education department, Mukherjee now plans to cover all private and government schools of the city.

''Earlier, I used to spend Rs 2500 from my pocket to set up the structure. My family and I are very simple people. I only keep the money required to feed my basic needs. Rest I'm happy to give away for my country and mother earth. Today also, I'm ready to help the needy. However, as the initiative is successfully changing the attitude of people towards the environment, politicians and BMC have been very cooperative to me. The civic body would now implement 'blue drum' structure for free... they just want me to guide and tour them through the technique,'' Mukherjee said.

''Devendra Fadnavis, his wife Amruta and Aaditya Thackeray have been very supportive. I would like to thank all of them,'' he added.

Till now, the environmentalist has requested over 54,000 Mumbaikars to actively take part of this initiative and over 55,000 plants have been planted and adopted by them.

He further educates people on what kind of tree needs to be planted where and how.

Mukherjee's remarkable work in the field of environment conservation has motivated many. Mukherjee urges everyone to be Jal Rakshak and be a part of this Nobel initiative.

''First, conserve, then consume,'' is Mukherjee's message to everyone who loves their country and life.