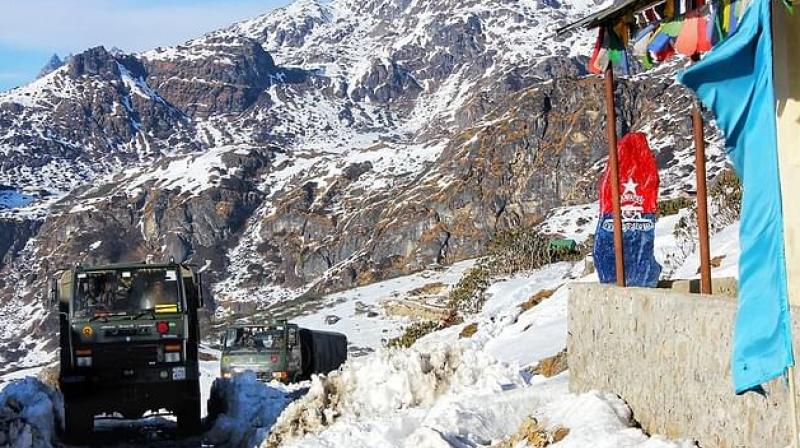 The faceoff, which was reported near Yangtse in the Tawang sector, had lasted for few hours before both sides disengaged. Representational Image. (Twitter)

New Delhi: Indian and Chinese soldiers were involved in a tense faceoff in the highly sensitive Tawang sector of Arunachal Pradesh last week when a large PLA patrolling party was intercepted by the Indian Army at the Line of Actual Control. Both sides were involved in a bit of pushing and shoving and physically blocked each other.

The faceoff, which was reported near Yangtse in the Tawang sector, had lasted for few hours before both sides disengaged. Some reports said that the Chinese troops had come to destroy unoccupied Indian bunkers, but sources in the Army said there has been no damage to India’s defences.

The faceoff comes at a time when the next round of India-China corps commanders’ meeting to discuss further disengagement between the two militaries in Ladakh is expected to take place in the next two-three days.

“This is a contested area where both sides patrol up to their claim areas. Sometimes when the patrolling parties from the two sides come face to face, such incidents happen. Each sides blocks the other and ask them to go back,” said an official. He said that whenever the patrols of both sides physically meet, the situation is managed according to the established protocols and mechanisms agreed by both sides. “Physical engagement can last for a few hours prior to disengaging as per the mutual understanding,” an official said.

While the focus has been on the standoff in Ladakh between Indian and Chinese soldiers, there has also been an increase in intrusions by PLA soldiers since last year in all other sectors along the LAC. The Chinese soldiers now come in larger numbers and are increasingly being more aggressive during these faceoffs. Some 100 Chinese soldiers had crossed the Line of Actual Control at Barahoti in Uttarakhand on August 30 and had stayed inside Indian territory for few hours before retreating.

Last week Army Chief Gen. M.M. Naravane had said China has deployed its troops in considerable numbers all across the LAC, which remains a matter of concern for India.

While there has been disengagement between Indian and Chinese troops on the banks of Pangong Tso and the Gogra Post, both armies are still in a standoff in the Hot Springs area. China has also shown no interest in any further de-escalation in Depsang Plains, where it is blocking Indian troops from patrolling.

However, the Army Chief was hopeful that by the end of the year all the friction points in Ladakh will be resolved through talks. “We are confident that as we discuss things with each other we will be able to reach a consensus on how the disengagement is to take place. By and by, all the friction points will get resolved,” he said last week.