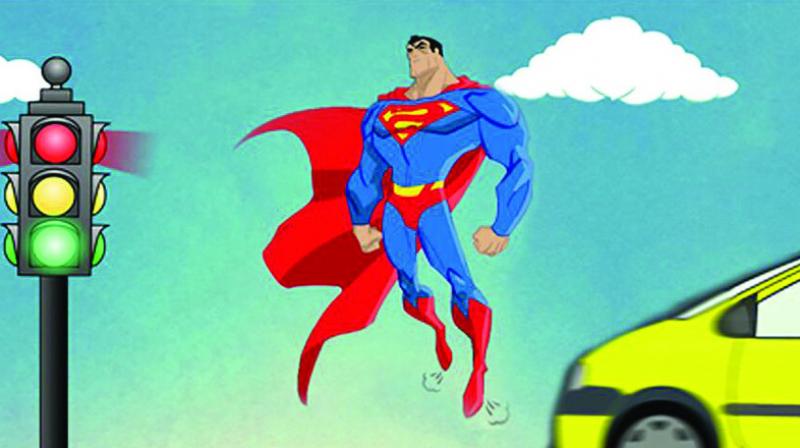 Picture posted by UP police shows Superman following the traffic signals on duty.

Lucknow: To curb the ongoing traffic issue in UP, the cops are tweeting photographs of comic book heroes attached with road safety messages for awareness.

ASP Rahul Srivastava, who is posted as PRO to DGP, says, “We are using the hashtag —#trafficmonth #uppolice—in every post about traffic awareness across all UP Twitter handles. We are trying to strike an emotional chord with the people as they will relate to such posts. For example, the message, “If you want to stay married, divorce speed”, is aimed at making people sensitive about how precious their life is to their loved ones. Similarly, the “hug your kids at home, but belt them in the car” post is targeted at parents”.

They are also planning social media awareness campaign-cum-competition in which people have to tweet creative ideas with the hashtags —#trafficmonth and #uppolice.  It says, best ideas will be rewarded.

“Those tweets can be paintings, slogans and posters about traffic awareness. A committee comprising people from various state universities and fine arts departments, will decide on the best tweets,” the ASP said.

The best 10 tweets/posters/ slogans senders will be invited to the DGP office for a cup of tea and will be given appreciation letters”, the ASP said. He added, “We have on-field plans too for the traffic awareness month. Our officers are going to schools, colleges and other places to educate kids and make people aware about traffic rules. We are also organising painting competitions and workshops in 75 districts. Also, now that we have a significant presence on social media, we are engaging with as many people as we can with our activities”