India   All India  09 Nov 2018  Will rename Hyderabad as Bhagyanagar, if voted to power, says BJP legislator
India, All India

Will rename Hyderabad as Bhagyanagar, if voted to power, says BJP legislator 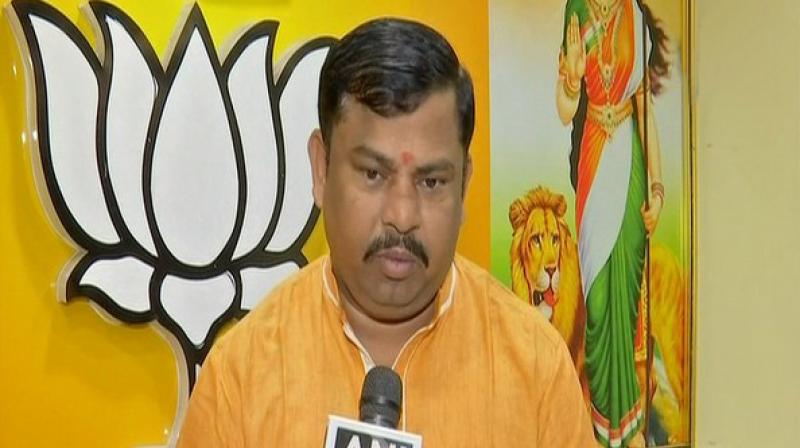 Singh further stated that the areas named after Mughals and Nizams will be changed and kept after the persons who fought for Telangana and for the country. (Photo: ANI)

Hyderabad: Raja Singh, a Bharatiya Janata Party legislator representing the Goshamahal assembly constituency, here has claimed that the party will rename Hyderabad as Bhagyanagar, if voted to power in the state.

The BJP MLA on Thursday also added that the party will change the names of Secunderabad and Karimnagar.

"Earlier, Hyderabad was Bhagyanagar and in 1590 Quli Qutub Shah came to Hyderabad, he changed Bhagyanagar to Hyderabad. At that time many Hindus were attacked, many temples destroyed. We are planning to rename Hyderabad. In Telangana, BJP will win in majority and then our first aim will be developing the state and second objective will be renaming Hyderabad as Bhagyanagar. We will also change the names of Secunderabad and Karimnagar," he told ANI.

Singh further stated that the areas named after Mughals and Nizams will be changed and kept after the persons who fought for Telangana and for the country.

Criticising his statement, Congress leader Renuka Chaudhary said, "We are proud Hyderabadis, Who is Raja Singh? He should go and change his name instead, no one will object."

Singh's statement comes a day after Gujarat Deputy Chief Minister Nitin Patel said that his government is considering renaming Ahmedabad as Karnavati if the BJP manages to muster support from the people.

Gujarat Chief Minister Vijay Rupani today said that the state government will take concrete steps on the name change of Ahmedabad to Karnavati after assessing "legal and all other angles."

Continuing the name changing spree, Uttar Pradesh Chief Minister Yogi Adityanath on Tuesday announced that the city of Faizabad would be renamed to Ayodhya.

Names of a number of Indian cities and railway stations have been changed in the recent past. Apart from renaming Faizabad as Ayodhya, the Uttar Pradesh government also changed the name of Allahabad to Prayagraj saying the name holds great significance to India.

In addition, the Mughalsarai Railway Station was renamed as Pandit Deendayal Upadhyay Junction earlier this year.