The Allahabad High Court in 2010 had distributed the land between Ram Lalla, Nirmohi Akhara and Sunni Waqf Board. 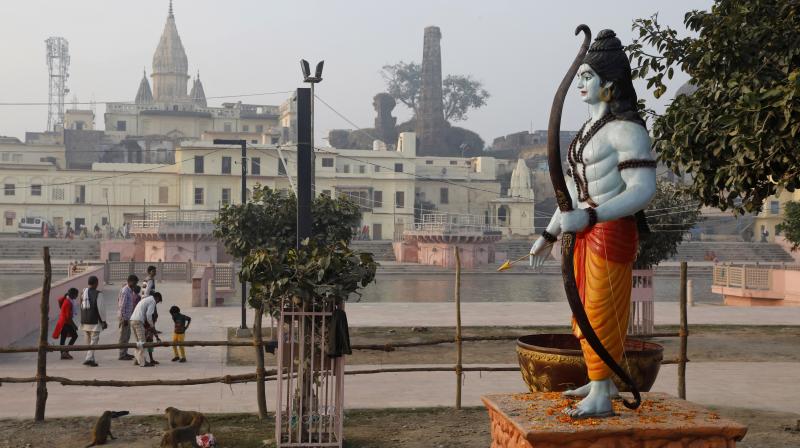 The final hearing began on August 6, and continued on a daily basis till October 16.

Ayodhya: The Supreme Court in a unanimous decision on Saturday cleared the way for the construction of a Ram Temple at the disputed site in Ayodhya – claimed both by Hindus and Muslims for nearly a century -- concluding India’s longest-running historical, political, legal and socio-religious debate.

The top court also directed the Centre to allot a 5-acre plot to the Sunni Waqf Board for a mosque at a 'prominent' site in the holy town. The court observed: "It is clear that the destruction of the 16th century three-domed structure by Hindu karsevaks, who wanted to build a Ram temple there, was a wrong that must be remedied.”

The bench, also comprising Justices S A Bobde, D Y Chandrachud, Ashok Bhushan and S Abdul Nazeer, said possession of the disputed 2.77-acre land would be handed over to deity Ram Lalla, or infant Ram, who was one of the three litigants in the case.

But “the right of Ram Lalla to the disputed property is subject to the maintenance of peace and law and order and tranquility,” said the five five judges.

The land, however, will remain with a central government receiver. The apex court asked the Centre to set up a trust within three months for construction of the temple.

“The faith of the Hindus that Lord Ram was born at the demolished structure is undisputed,” the court said in its 1,045-page verdict in the politically-sensitive Ram Janmbhoomi-Babri Masjid land case.

“The lands of our country have witnessed invasions and dissentions. Yet they have assimilated into the idea of India everyone who sought their providence, whether they came as merchants, travellers or as conquerors,” the verdict read.

“The history and culture of this country have been home to quests for truth, through the material, the political, and the spiritual. This court is called upon to fulfill its adjudicatory function where it is claimed the two quests for the truth impinge on the freedoms of the other or violate the rule of law,” it said.

The Supreme Court observed Hindus had established their case that they were in possession of the outer courtyard but the UP Sunni Central Waqf Board had failed to prove its argument in the dispute.

“The dispute is over immovable property. The court does not decide title on the basis of faith or belief but on the basis of evidence,” the judgement said, delivered at the end of a marathon 40-day hearing -- the second longest in the history of the apex court. Justice Gogoi is due to retire on November 17.

“On the balance of probabilities, there is clear evidence to indicate that the worship by the Hindus in the outer courtyard has continued unimpeded even before 1857 when the British annexed Oudh region.”

“The Muslims have offered no evidence to indicate that they were in exclusive possession” of the mosque before 1857," the verdict read.

“The fact that there lay a temple beneath the destroyed structure has been established by the Archaeological Survey of India (ASI) and the underlying structure was not an Islamic structure,” the apex court judgment said.

The Lucknow bench of the Allahabad High Court had ordered excavation at the site in 2003.

The top court said terming the archaeological evidence as merely an opinion would be a great disservice to the Archaeological Survey of India.

The court also said that Hindus consider the disputed site as the birthplace of Lord Ram and even Muslims say this about that place. The faith of Hindus that Lord Ram was born at the demolished structure was undisputed, the apex court said.

The bench said the existence of Sita Rasoi, Ram Chabutra and Bhandar grih were testimony to the religious nature of the place.

The demolition of the 500-year Babri mosque on December 6, 1992 triggered nationwide communal riots that killed more than 2,000 people. Subsequently, Muslim extremists angered by the demolition and the riots, carried out a series of bombings in Mumbai on March 12, 1993, which left hundreds dead.

The three litigants in the case -- the symbolic Ram Lalla Virajman, the Nirmohi Akhara and the Sunni Waqf Board -- had knocked on the top court’s door after a three-judge bench of the Allahabad High Court in September 2010 distributed the land equally between them. The court had ruled 2:1 in favour of Hindus.

Of that judgement, the Supreme Court said: "The high court wrongly decided the title suit by resorting to partitioning of the disputed land in three parts. The disputed site was government land in the revenue records.”

The trifurcation of the disputed area was stalled by the apex court in May, 2011 after both Hindus and Muslims challenged the Allahabad High Court verdict on nearly ten broad points.

Of Saturday's verdict, the litigants said:

“The verdict is very balanced and it is a victory of the people,” said C S Vaidyanathan, lawyer for deity Ram Lalla.

But the Sunni Waqf Board, one of the main parties, said it was not satisfied. “The verdict holds no value for us. It has lot of contradictions,” Zafaryab Jilani, lawyer for the Board, told reporters.

The Nirmohi Akhara said it had no ‘regrets’ about the verdict.

The Ayodhya dispute had over the decades launched several independent and government-sponsored initiatives to determine whether a Hindu temple existed beneath the 16th Century Babri Masjid that was pulled down by right wing activists on December 6, 1992.

Hindu parties have traditionally believed that the site was the birthplace of Lord Ram – arguing on the premises of archaeological evidence, faith and collective memory -- while the Sunni Waqf Board argued the land where the Babri Masjid stood was waqf property.

There was unprecedented security in Uttar Pradesh on Saturday as well as other parts of India with Prime Minister Narendra Modi had said Friday that the judgement would not be anyone’s “victory or defeat” but “would give strength to India’s tradition of peace, unity and amity”.

On Friday, Chief Justice Ranjan Gogoi also held a meeting with the chief secretary and top police officers of Uttar Pradesh and took stock of security arrangements ahead of the verdict.

Here is a brief history of the case:

Initially, as many as five lawsuits were filed in the lower court. The first was by Gopal Singh Visharad, a devotee of ‘Ram Lalla'’ in 1950 to seek enforcement of the right to worship of Hindus at the disputed site.

In the same year, the Paramahansa Ramachandra Das had also filed the lawsuit for continuation of worship and keeping the idols under the central dome of the now-demolished disputed structure. The plea was later withdrawn.

Then came the lawsuit of the Uttar Pradesh Sunni Central Wakf Board which moved the court in 1961, claiming title right over the disputed property.

The deity, ‘Ram Lalla Virajman’, through next friend and former Allahabad High Court judge Deoki Nandan Agrawal, and the Janmbhoomi (the birthplace) moved the lawsuit in 1989, seeking title right over the entire disputed property on the key ground that the land itself has the character of the deity and of a ‘juristic entity’.

Later, all lawsuits were transferred to the Allahabad High Court for adjudication following the demolition of the disputed Ram Janmbhoomi-Babri Masjid structure on December 6, 1992, sparking communal riots in the country. The apex court had on August 6 commenced day-to-day proceedings in the case as the mediation proceedings initiated to find the amicable resolution had failed.

The bench on October 16 had reserved the judgement after a marathon hearing of 40 days.