None of the posters, significantly, have a photograph of Mr Mulayam Singh Yadav or any other family member. 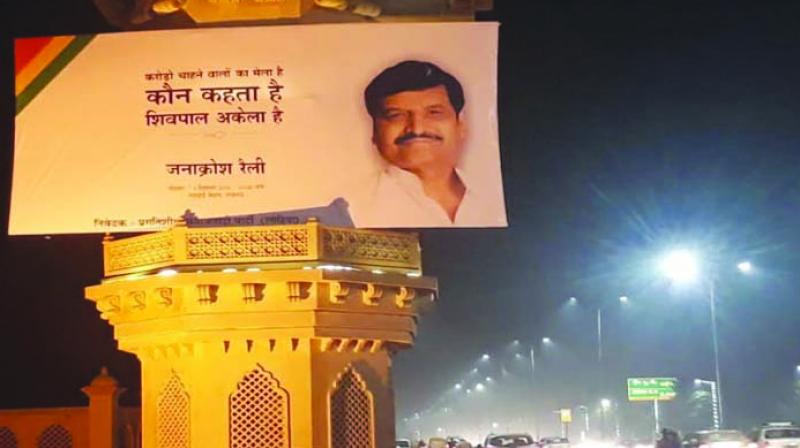 A poster for Shivpal Yadav’s Sunday rally in Lucknow

Lucknow: On a stark white background with a two line slogan, breakaway SP leader Shivpal Yadav who now heads the Pragatisheel Samajwadi Party (PSP) , is making  waves across the state.

Mr Shivpal Yadav is scheduled to display his political power on Sunday with his “Janakrosh Rally” in Lucknow. Through this rally, Mr Shivpal Yadav will prove to his estranged nephew, Akhilesh Yadav, that he can emerge as a force to reckon with on UP’s political horizon.

None of the posters, significantly, have a photograph of Mr Mulayam Singh Yadav or any other family member.

Sources said that the Samajwadi patriarch has not been invited to the Sunday rally either.

This comes in the wake of the fact that Mr Mulayam Singh Yadav recently shared the dais with his son Akhilesh and cousin Prof Ram Gopal Yadav in Ferozabad.

The message is clear — Mr Shivpal Yadav will now chart his own course in state politics without his elder brother Mulayam Singh Yadav.

The teaser campaign began a day ago with a poster that just showed the back head of Mr Shivpal Yadav with a slogan “Hain taiyyar hum” written in bold.

A day later, a series of posters have popped up in the state capital with a message clearly aimed at his detractors.

Mohd Shahid , spokesman of PSP told this correspondent that, “Our campaign does not target anyone. We are moving ahead wioth Mr Shivpal Yadav as our leader. As for Mr Mulayam Singh Yadav, he will always remain our guardian.”