India   All India  09 Dec 2019  India-Japan ministerial meet with a focus on Indo-Pacific
India, All India

India-Japan ministerial meet with a focus on Indo-Pacific

The ministers also concurred to proceed with coordination for the first India-Japan joint fighter aircraft exercise in Japan. 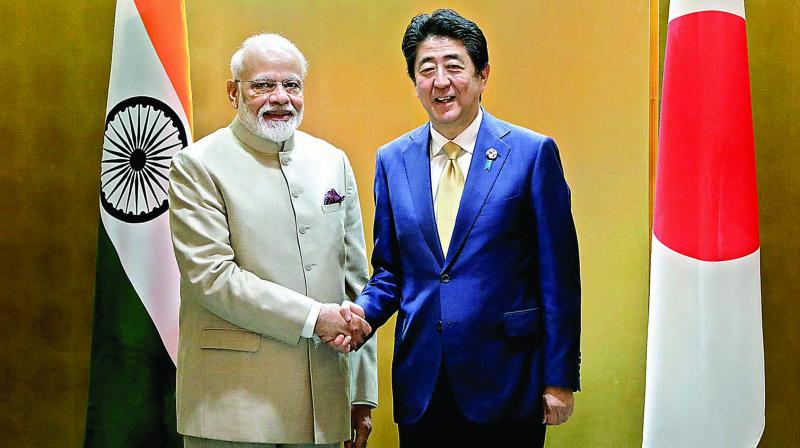 I often say that Japan-India relations have more potential than any other tie in the world… This time, hand-in-hand with Prime Minister Narendra Modi, I want to boost ties in every possible field and elevate this to a special strategic and global partnership,” said Japanese PM Shinzo Abe, during the summit in Tokyo on August 31, 2014.

India’s second nuclear test in 1998 shocked and annoyed Japan and caused some strain in the relationship, initially at least. A few days after the test, Asahi TV requested an interview with then defence minister George Fernandes, who agreed and 15 minutes were allotted for it. When the Japanese producer was reminded 15 minutes later, Fernandes overruled the time limit and assured him to continue and satisfy himself. The interview went on for 55 minutes during which Fernandes gave what was an excellent presentation of appreciating Japan’s concern/disappointment with India and articulating why India felt the need for a nuclear deterrent in view of two inimical nuclear-armed neighbours. The Japanese producer was overjoyed and the interview was very well received in Japan. Whatever dissonance in India-Japan relations there was then, certainly did not interrupt maritime cooperation between the two nations. And that was so because since decades Japan has been one country which has acknowledged Indian maritime forces as very effective in not only fulfilling India’s national aims, but also one whose presence in the Indian Ocean region is a deterrence.

In the first India-Japan 2+2 Foreign and Defence Ministerial Meeting on November 30, 2019 in New Delhi, both nations’ defence ministers Rajnath Singh and Kono Taro, external affairs minister S. Jaishankar and foreign affairs minister Motegi Toshimitsu affirmed that this dialogue will further enhance the strategic depth of bilateral security and defence cooperation. Acknowledging emerging security challenges, the ministers reiterated their commitment to advancing bilateral security cooperation based on the 2008 Joint Declaration on Security Cooperation and the 2009 Action Plan to Advance Security Cooperation. Recalling that the two sides had a shared vision of a free, open, inclusive and rules-based Indo-Pacific region in which the principles of sovereignty and territorial integrity are ensured, and all countries enjoy freedom of navigation and overflight, the ministers emphasised that further strengthening of bilateral cooperation was in the mutual interest of both countries and would also help in furthering the cause of peace, security and prosperity in the Indo-Pacific region.

Welcoming the progress made in deepening bilateral defence cooperation in 2018, the ministers noted with satisfaction that since then India and Japan have initiated bilateral exercises between all three services of their defence forces. The ministers agreed on holding bilateral exercises regularly and with expanding scope and expressed satisfaction on the recently conducted second editions of exercises Dharma Guardian and Shinyuu Maitri this year. The ministers also concurred to proceed with coordination for the first India-Japan joint fighter aircraft exercise in Japan.

Acknowledging the importance of ensuring maritime safety in achieving a free, open, inclusive and rules-based Indo-Pacific, the ministers agreed to further promote cooperation in the field of capacity building in maritime security and maritime domain awareness including through cooperation with other countries. In this context, the ministers welcomed the setting up of the Information Fusion Centre — Indian Ocean Region (IFC-IOR) by India in December 2018. The Indian side looked forward to the Japanese side dispatching a liaison officer at the IFC-IOR in the near future. The ministers noted with satisfaction the commencement of exchange of information based on the Implementing Arrangement for Deeper Cooperation between the Japan Maritime Self-Defence Force and the Indian Navy signed last year.

Emphasising the need to further strengthen defence equipment and technology cooperation the ministers looked forward to productive discussions in the fifth Joint Working Group on Defence Equipment and Technology Cooperation (JWG-DETC) and in this context, welcomed the progress on cooperative research in the area of unmanned ground vehicles (UGV)/ robotics.

Appreciating the existing exchange programs between the defence, educational and research institutions of the two countries, the ministers agreed to expand the same.

Discussing multilateral cooperation, the ministers recalled the Japan-India-US Summit meetings in November 2018 and June 2019 and expressed their satisfaction at trilateral cooperation by way of Exercise “Malabar 2019” held in September-October 2019 off the coast of Japan, the Mine-Countermeasures Exercise (MINEX) held in Japan in July 2019 and “Cope India 2018” in which Japan participated as an observer in December 2018. The ministers also noted with satisfaction the recent Japan-India-Australia-US foreign ministerial consultations in New York in September 2019.

There was a frank and fruitful exchange of views on the regional issues of mutual interest, particularly on the security situation in the India-Pacific region.

The ministers reaffirmed the importance of supporting Asean centrality and unity for promoting peace and prosperity of the Indo-Pacific and welcomed the adoption of “Asean Outlook on the Indo-Pacific (AOIP)” during the 34th Asean Summit in Thailand in June 2019. Expressing their commitment to working together with Asean for achieving their shared objectives, the ministers also reiterated their support for Asean-led frameworks such as the East Asia Summit (EAS), the Asean Regional Forum (ARF) and the Asean Defence Ministers’ Meeting-Plus (ADMM-Plus).

The Japanese side appreciated India’s announcement of the “Indo-Pacific Oceans Initiative” at the recent 14th EAS to create a safe, secure, stable, prosperous and sustainable maritime domain and confirmed their willingness to discuss concrete cooperation based on the initiative. The ministers noted with satisfaction that India’s and Japan’s initiatives for realising a free and open Indo-Pacific, including also the recent “Indo-Pacific Oceans Initiative” and AOIP all strive for an Indo-Pacific region that is inclusive and open to all countries in the region. The Indian side welcomed Japan’s “Vientiane Vision 2.0” in November 2019 as an updated initiative for defence cooperation between Japan and Asean.

The ministers exchanged views on the recent developments in the South China Sea keeping in view also the Chairman’s Statement of the 14th EAS. In this context, the ministers reaffirmed the importance of freedom of navigation and overflight, unimpeded lawful commerce and peaceful resolution of disputes with full respect for legal and diplomatic processes in accordance with the universally recognised principles of international law, including those reflected in the United Nations Convention on the Law of the Sea (UNCLOS). The ministers also took note of the negotiations of a Code of Conduct (CoC) and urged that it should be effective, substantive, and consistent with international law, including the UNCLOS, ensure freedom of navigation and must not prejudice the rights and interests of the stakeholders using the South China Sea and freedoms of all states under international law.

The ministers condemned in the strongest terms the growing threat of terrorism and acknowledged that it constituted a major threat to peace and security in the region. The ministers called upon all countries to take resolute action in rooting out terrorist safe havens and infrastructure, disrupting terrorist networks and eliminating financing channels and halting cross-border movement of terrorists. The ministers underlined the need for all countries to ensure that all territory under their control is not used to launch terrorist attacks on other countries in any manner. They noted in this context the threat posed to regional security by terrorist networks operating out of Pakistan and called upon it to take resolute and irreversible action against them and fully comply with international commitments, including to FATF.

The meeting of the visiting ministers with PM Narendra Modi came a day after Japan’s deputy minister for economy, trade and industry Hideki Makihara said in an interview to the media that Tokyo was not considering signing the China-backed Regional Comprehensive Economic Partnership (RCEP) without India. Citing the deal’s potential impact on the livelihoods of its most vulnerable citizens, India recently announced that it was withdrawing from it. China said the 15 remaining countries had decided to move forward first, and India was welcome to join whenever it was ready. Mr Makhira added that Japan will continue to try to persuade India to join.

The stage has been set for messrs Modi and Abe to meet at Guwahati and thence to Imphal very soon/mid-December 2019 — another first ever.